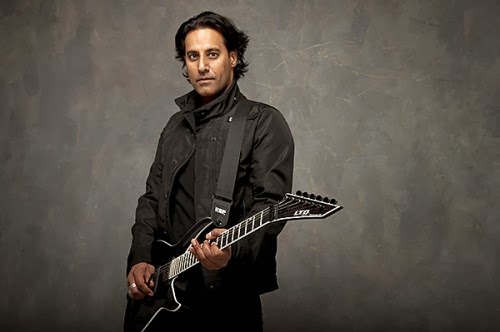 Berklee Groove: So tell me about your evolution as a musician.
Prashant Aswani: I came from an Indian classical music background, and that was probably my earliest influence. I didn’t really start listening to current music of the time until I was in like first or second grade. I was exposed to AC/DC, Men at Work, A Flock of Seagulls, Michael Jackson – y’know whatever the pop was in the ‘80s – [for me,] AC/DC was like the band. There was something super groovin’ and simple about their rhythms. The “pocket” was really appealing to me because I played Tabla, an Indian percussion instrument, and I was really into rhythm. I was able to play my Tabla to those songs. [As I learned to play guitar], I got into John McLaughlin’s Shakti album. Once I heard [him] playing with Indian classical musicians, I was completely involved in that. My senior year of high school, I was in jazz band and the teacher was a graduate from Berklee. I didn’t know anything about chords, and I remember [when] trying out, he put a lead sheet in front of me and I had no idea what it was. He was so cool that he said, ‘Let me just play some stuff on the piano and try to improvise.’ So he did, and I was able to find the key and improvise. I started learning stuff from him after school, and he encouraged me to go to Berklee.