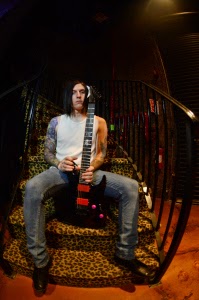 Vincent’s story has several meanings to him as well, and the title to the album reflects his story.  “Star Crossed Speed Story is how I hear the music.  It’s really fast, it’s exciting and it sounds like video game music.  I’m kind of a big nerd so I really wanted it to sound like music for an anime.  It’s something that means a lot to me.  ‘Star Crossed’ because of everything that’s happened to me was supposed to happen on my life’s path; ‘Speed Story’ because it’s my story but it’s told through shred music. So it basically makes sense to me; it’s me telling my story through music.”
Special guests making appearances are two of Vincent’s heroes and a new friend he met through the Shrapnel family.  “Track 3 has a guest solo from Michael Angelo Batio who really inspired me to try to play the way he does.  I began talking to him when I was brought into the Dean Guitar family.  He’s super cool and was nice enough to play on my album.  This track is so fast it’s insane,” he laughs.  “Track 5 features Paul Gilbert from Racer X who has been my hero forever.  Many thanks to Mike Varney from Shrapnel for setting that up as it turned out great.  My new friend Dario Lorina from Vegas is on Track 11.  I met Dario through Mike Varney and Shrapnel.  We’re the same age and we are similar players.  His album just came out on Shrapnel, and I suggest you have a listen.  I have some really cool guest players including my band mates from Falling In Reverse, drummer Ryan Seaman and Ron Ficarro on bass.”
Full interview http://screamermagazine.com/interviews/jacky-vincent-star-crossed-speed-story/
Dario Lorina Jacky Vincent Michael Angelo Batio Mike Varney