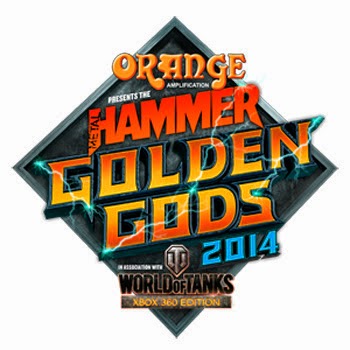 Orange Amplification is reinforcing its hard rock credentials as it sponsors, for the third consecutive year, the Metal Hammer Golden God Awards presented in association with World Of Tanks. This prestigious event, hosted by Steel Panther, takes place at the London Indigo2, Greenwich on the 16th June 2014, preceded by the pre-show boat party on HMS Hammer presented by Vans.

The Metal Hammer Gold God Awards are some of the most coveted metal music awards in the world. They’re always accompanied by an exclusive, explosive party, which features intimate live music performances from the most sought after bands in the business. Orange Amplification has a long history of being the amp of choice for metal guitarists and bassists and their credentials were further reinforced recently with the launch of the very metal Dual Dark amplifier whose earth shaking tonal depth would make the heart of any metal head melt!

Satch, Michael, Lexxi and Stix of Steel Panther, renowned for their ability for absurd mimicry of the 1980’s metal are hosting the event. Expect spandex, mad jokes and superb craftsmanship in their performance! The Dillinger Escape Plan are looking forward to wrecking havoc on HMS Hammer, as are Texan hell raisers Upon A Burning Body, Rex Brown’s Kill Devil Hill and death metal heroesDying Fetus. Names for the main event will be announced in the coming weeks.

At the core of every Golden God celebrations are the fans, because they vote for many of the awards. This year is no exception, and every fan that votes will be in with a chance of winning tickets to attend this highly respected event. Nominations are up on the Metal Hammer website and voting opens Tuesday April 8th 2014 until Friday 23rd May 2014. Other awards presented on the night, and chosen by the Metal Hammer team included The Golden God award presented by Orange Amplification.

Orange ambassadors in the nominations include Justin Aufdemkampe (Miss May I) for the Dimebag Darrell Shredder Award, Killswitch Engage for Best Live Band, Scorpion Child in the Best Underground category and Architects for Best UK Band. Vote and be in with a chance of getting shoulder to shoulder with your favourite artists.