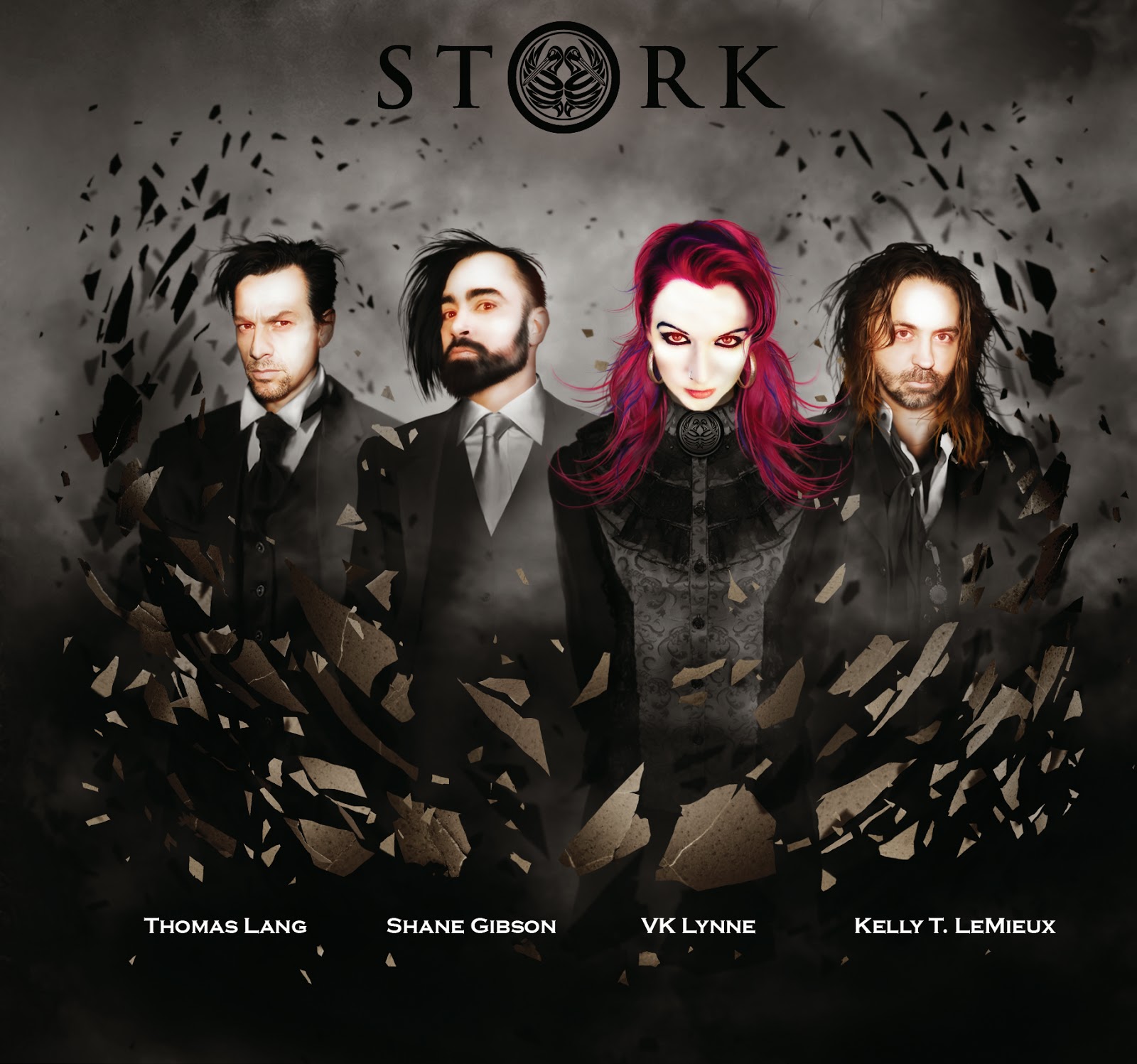 It is with deepest sadness and regret that we must confirm that stOrk founding member and lead guitarist Shane Paul Gibson passed away at 5:45 AM on April 15th, 2014 in the UAB Hospital in Birmingham, Alabama as a result of complications from a blood clotting disorder. He was 35 years old. Shane was one of the best guitar players the world has ever known and his virtuosity was matched only by his wit and generosity of spirit. He will be missed beyond measure.


Our thoughts and prayers go out to his family and all those who loved him as much as we did.
stOrk-
From Shane's family:

"I want to thank all the friends and fans for such beautiful words. It means so much to us to see the love being shared, a comfort in our deep sorrow. He was a son, brother, nephew, godchild, cousin...Shane. our heart and soul. Thank you for being his friends and part of his life. His music will forever be in our hearts. He loved you all"

Truth In shredding passes on our condolences to the family and friends... tragic news :(
Laurie Monk. 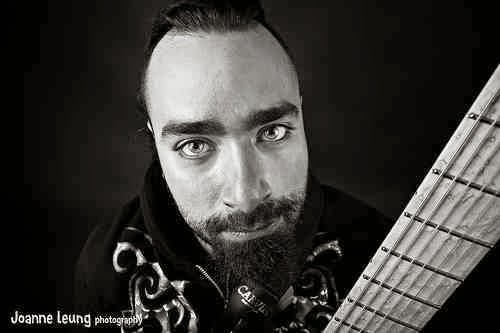 Thomas Lang
I am still in shock. Devastated. I am both sad and angry. I will miss my crazy StOrk brother Shane. Thank you all for your kind words and condolences.
VK Lynne
I remember introducing him to someone, and he stuck out his hand and said, "Hey, I'm Shane. I play guitar…um, I can't do much else, really." 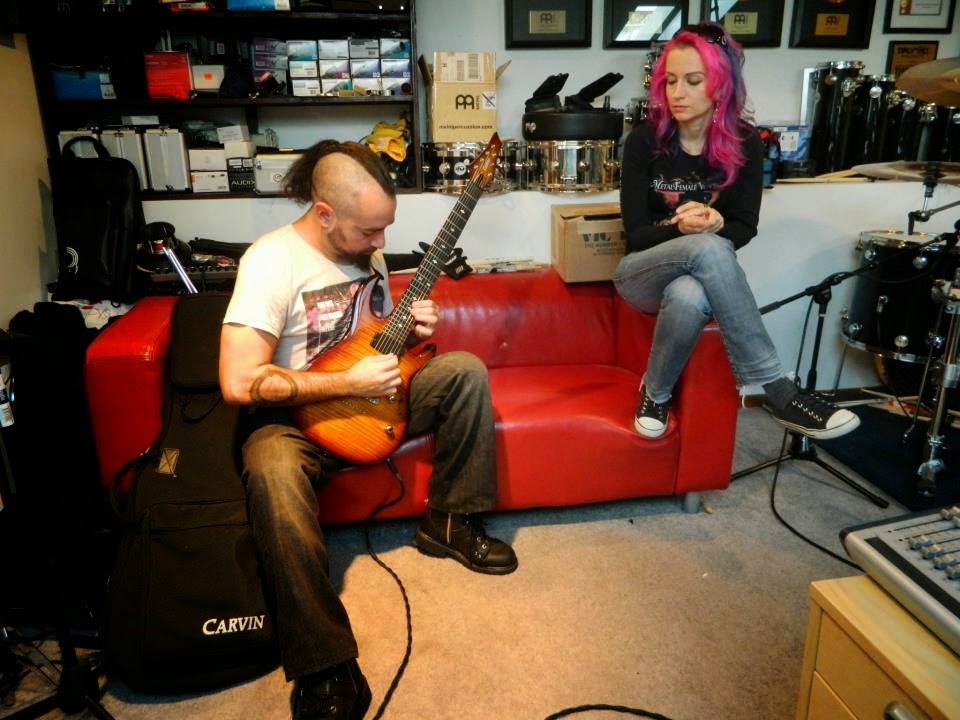 The longer I knew him, the more I found that to be true. He was truly an ARTIST, with his offbeat sense of humor, who heard his own unique brand of music in the 'key of evil', and in his too-short lifetime, we only were privy to a fraction of what was in his head.

Sometimes I think he just wasn't meant for this world.
I pray he's in a better one now, giving his merry "hey girl" to the angels. 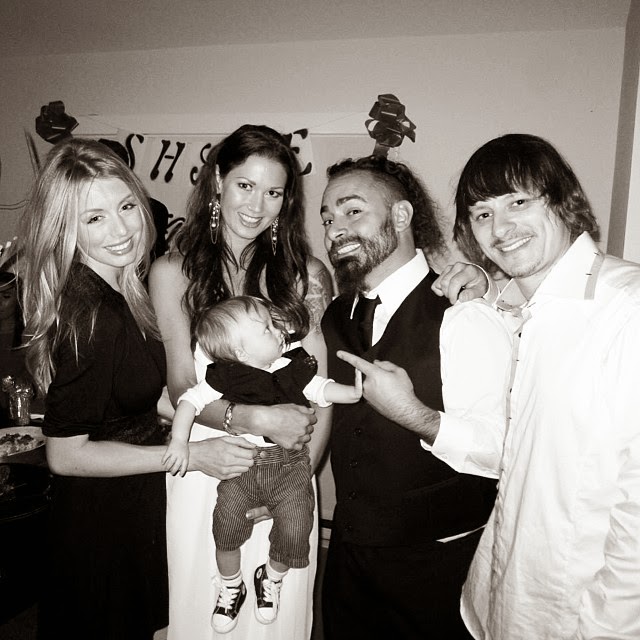 Ray Luzier - Instagram: "Death is so strange and the timing of it is never right. I'm still in disbelief that we lost Shane Gibson days ago. You were way too young to leave this planet. You were one of the most talented, funniest and caring people I've ever known. I'm honored to have shared the stage and travel many places with you for so many years. My heart goes out to the family and friends that you've touched in your short life. You will truly be missed and never forgotten. RIP ENAHS."

James'Munky'Shaffer
#shanegibson u were an amazing Gtr player and an amazing person. Ur kindness and talent will be missed. I'm very fortunate to have known you 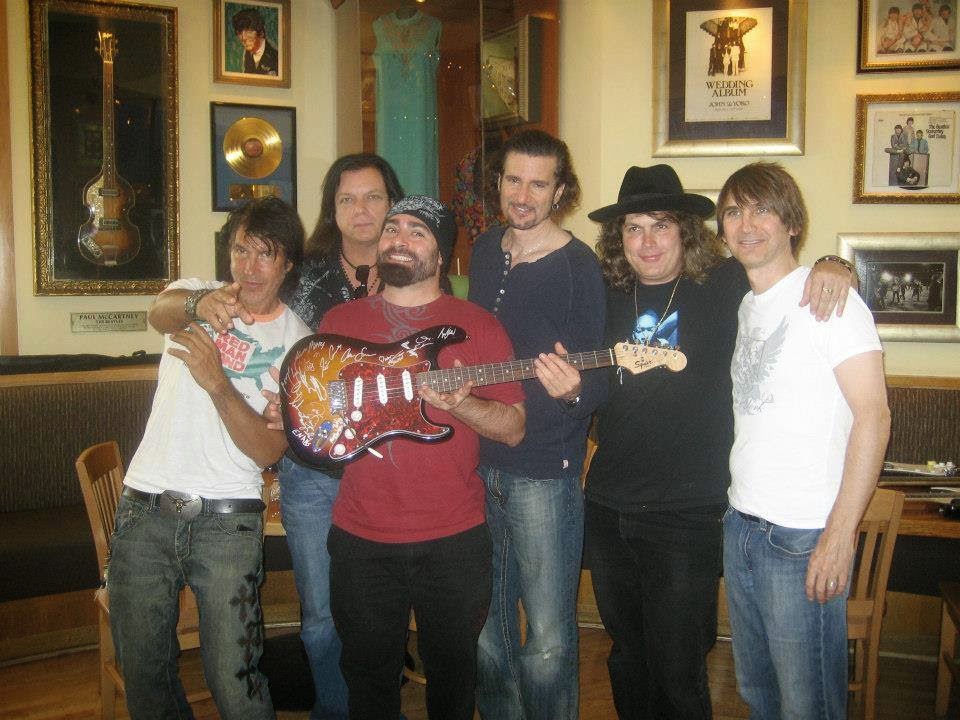 Ken Mary
We received some very sad news Tuesday. Former Korn guitarist Shane Gibson passed away. He was a great player and a great guy, and always ready to help out. Here he is holding the guitar for an NLO signing party at the Hard Rock Café in Los Angeles. Our prayers go out to the family. Shane, you will be missed!! — with George Lynch,Chuck Wright, Shane Gibson, Bruce Kulick and Lanny Cordola.

Bumblefoot
A friend of mine just passed away, Shane GIbson. Fantastic guitarist, and hell of a guy. Will miss him. RIP brutha...

Rusty Cooley
Just got the awful news that a super cool dude and one hell of a guitar player and friend passed Shane Gibson you are gonna be missed! soooooo bummed this is not cool at all! im very sad! Love ya bro tell Jimmy, Randy, Stevie and Dime i said hi! 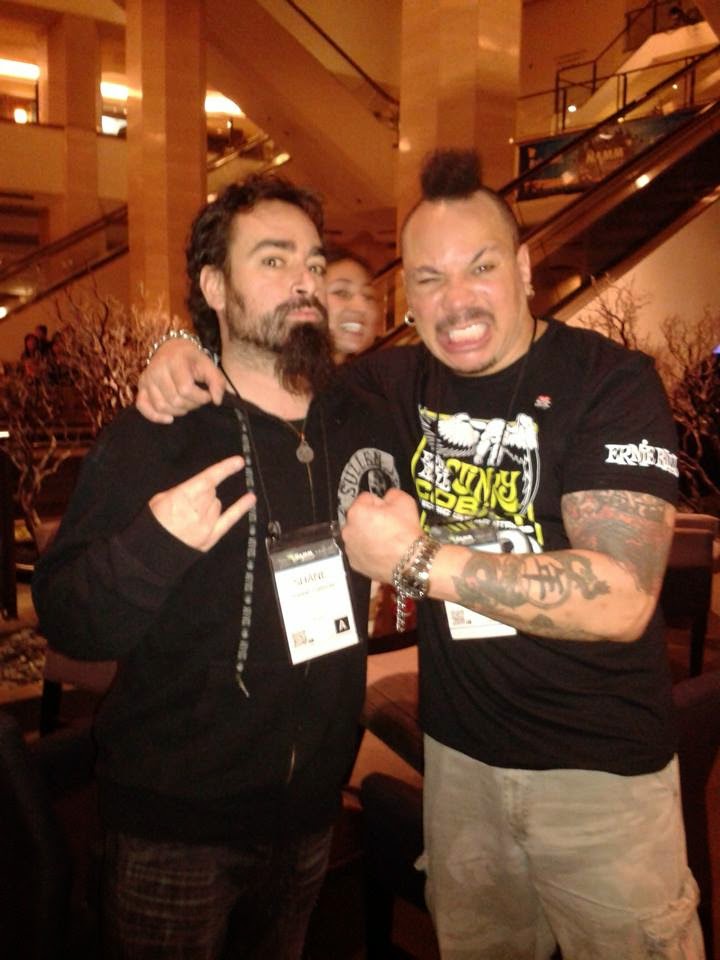 Toshi Iseda
Rest In Peace, Shane. Brother.........Just don't have the words....... Love you, man.
Mark Holcomb
RIP Shane Gibson; such a sweet and incredibly talented dude. You're gone but not forgotten.

Andy James
Just heard the news Shane Gibson has passed away. Sad news people, he was a seriously scary player!!

Andew Kiss: For the memory of a very talented guitar player who has passed. I've learned a lot from him. 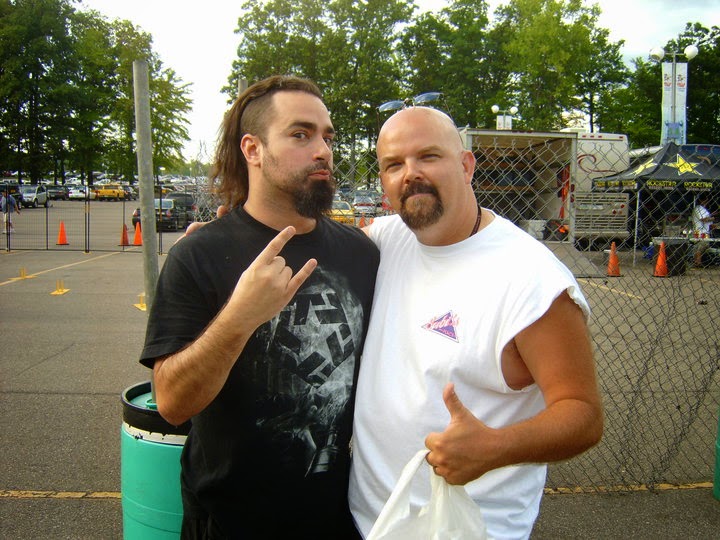 Sean Baker
Rest in Peace, Shane. You were a great dude and player!


Dave Reffett
My heartfelt condolences go out to the friends, family and fans of former Korn / Stork guitarist Shane Gibson. Shane was scheduled to appear months ago at the last NAMM Metal Jam event and then could not make it. Shane was always extremely pleasant in my dealings and communications with him and he was one hell of a guitar player. RIP

SchwarZenatoR
I've been putting this off, but our friend and founding SchwarZenatoR member Shane Gibson passed away this morning. http://ow.ly/vPaPA


Jeremy Krull
I dealt with Shane Gibson on one project a few years ago. Ironically it was probably one of the worst things I've ever been involved with as far as the label handling it and the overall lack of organization. Shane, either way, was a patient dude and I remember his track pretty well (after all I had to edit and mix it). I didn't really run into him again after that save for the following NAMM but I had seen him around periodically. He was someone who I feel knew exactly what they wanted creatively and was uncompromising in that sense. Gone way way too soon. Talent is talent and we are better for him having been around.
Rick Graham
Shocked and saddened to hear about the death of guitarist/musician Shane Gibson. I didn't know him personally but remember being blown away watching his videos years ago. His great sense of humour really came across in the videos too. R.I.P Shane.

Tina Guo
Precious life... my friend Shane Gibson passed away yesterday- he was an amazingly talented musician and a... http://fb.me/6qT6t6GZF

David Shankle
This is so sad to see my guitar friend Shane go away from us this is not good he was to play a solo on the new DSG cd as well.You will be missed my friend R.I.P.

Giacomo Castellano
I'm extremely sorry to read that SHANE GIBSON is gone! This guy was a genius and he won't be forgotten
RIP shane!

Atma Anur
Life is a beautiful gift filled with uncertainty and tribulation. The wonders that surround us every day can inspire us to actively love life, and each other. We do not know how much time we have here, at any given point, let's choose to do the best we can to bring something good to each moment. I am sad that my friend is gone, he was an amazing musician and a beautiful person... we had great musical fun and enjoyment... what a huge talent. I send my wishes of blessings to his family. Shane Gibson, R.I.P

Rob Johnson‎
R.I.P SHANE You will always be thought of as a Great Guitarist / Musician 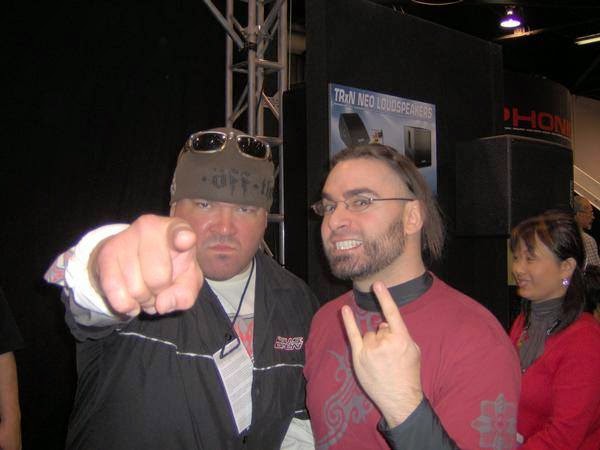 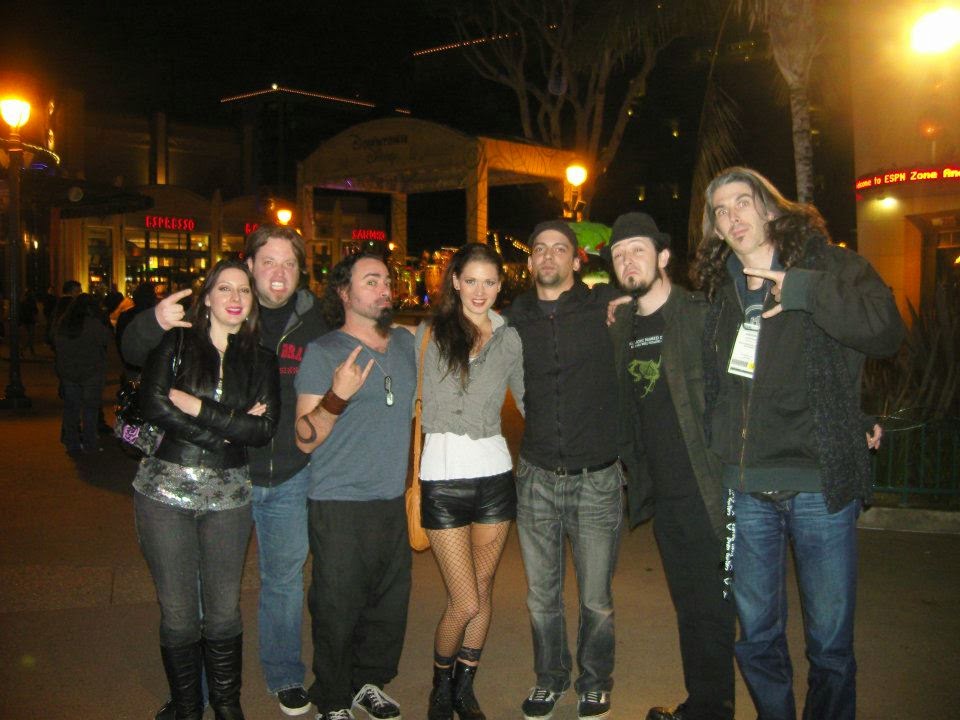 Fanalo Alaux Shane Gibson, (3rd from the left) died today. I have no words...
This guy was a killer. God bless him.

Fred Brum
Just found out Shane Gibson has passed away. I am in utter shock and disbelief right now. You were such a nice, down to earth and inspirational individual - gone way too soon. RIP.

This video is going up in what is a sad day for the guitar community as we lost the brilliant Shane Gibson today - great guy, great guitarist, and a humble, kind person. Rest in peace.

Doug Stapp
R.I.P Shane Gibson. Not only was he an outstanding guitar player but an incredibly nice guy. I met him years and years ago via our crazy guitar circles. I can't say enough great things about him. Very sad.
Ivan Chopik
Gone much too soon. Rest in peace Shane.

Joe Marro
Wow, Shane Gibson died? he was a huge inspiration to me when I was younger. Man, life is crazy!

Sam Bell
Sad to hear of Shane Gibsons passing. The Dude was a super guitarist and teacher. Its very rare to find a virtuoso musician who doesn't take themselves so seriously whilst delivering amazing goods. You will be missed dude.

Jake Willson Extremely sad to hear about the passing of my friend Shane Gibson. He was an exceptional talent and a genuinely important part of my development as a guitarist. We got to meet only once when he was touring in the UK with KoRn, but when I was an annoying teenager, he was full of advice and encouragement: pre-skype, he was happy to chat over the phone about any questions I had. Most of all, I am sad that the music he left us with is all that we'll have... I had better get writing.

Jude Gold
Much respect to Shane Gibson, R.I.P. He was a badass player, inspiring human, and nice guy. I am shocked he passed away so young. Was proud to have him as a guest counselor at MI, and publish a bit of his mind-melting lickery in GP mag. I will miss you, Shane! 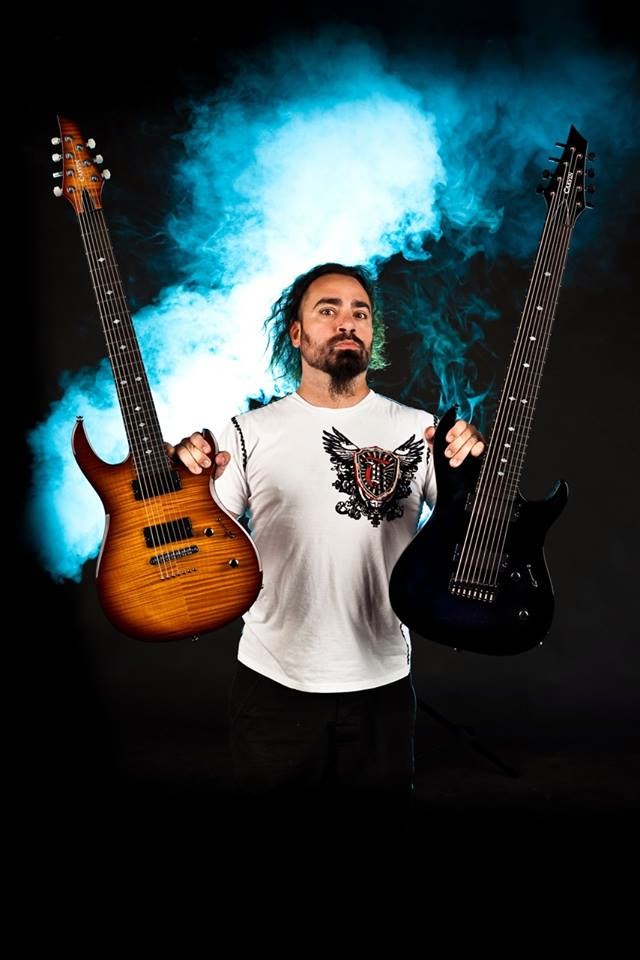 Carvin Guitars
R.I.P. Shane Gibson
Updated 10 minutes ago · Taken at
It is with deepest sadness and regret to announce that lead guitarist Shane Paul Gibson passed away at 5:45 AM on April 15th, 2014 in the UAB Hospital in Birmingham, Alabama as a result of complications from a blood clotting disorder. He was 35 years old. Shane was one of the best guitar players the world has ever known and his virtuosity was matched only by his wit and generosity of spirit. He will be missed beyond measure.

Our thoughts and prayers go out to his family and all those who loved him as much as we did.

For those who got to meet and know Shane, they can attest to the sweet, humble, humorous and kind spirit he truly was. The world is mourning the loss of a truly talented & great player that has been called back home... and I the loss of a friend.

Please feel free to post any pictures you might have of Shane Gibson in remembrance of a great musician and friend.

We love you Shane.

Rest In Peace my brother.

EMG Pickups s
Rest in peace Shane Gibson, you were way too young to leave us so soon. Our thoughts are with all the friends, family and fans you leave behind. 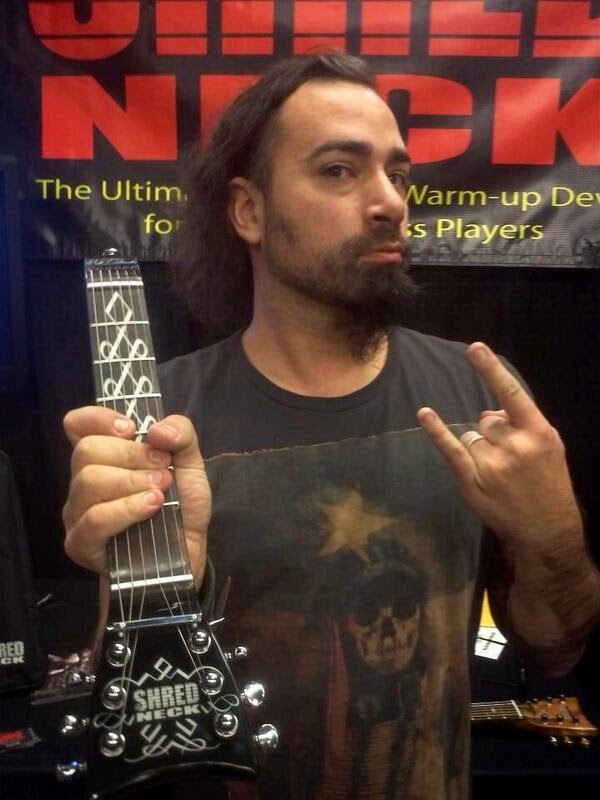 Shredneck
Shocked by the news of Shane Gibson's passing. Rest in peace Shane

Eamonn O Riain
I was friends with the man over 8 years. Truly saddened no words can express the emptiness I feel inside 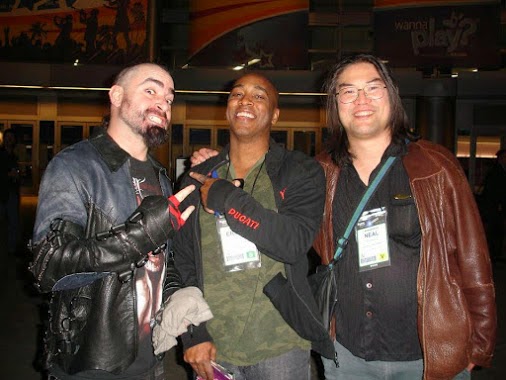 Shian Hirsch
Former Korn guitarist Shane Gibson passed away last night I was honored to meet and hang with him on January he was so kind funny and talented person so shame... RIP
Shane Gibson Interview At JamPlay