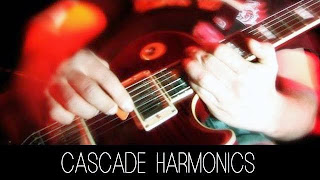 Find a full description and tabs @http://thebestguitarplayer.com/lesson...
In this lesson John will explain how to use Cascade Harmonics
It's a very cool technique to apply into your playing and is widely used
by players like Chet Atkins and Tommy Emmanuel
John will make it very easy to understand and practice!!
So what are harmonics?
A guitar harmonic is a musical note played by preventing or amplifying vibration of certain overtones of a guitar string.
Music using harmonics can contain very high pitch notes difficult or impossible to reach by fretting. Guitar harmonics also produce a different sound quality than fretted notes, and are one of many techniques used to create musical variety.
Technique
Harmonics are mainly generated manually by different playing techniques. Another method is sound wave feedback of a guitar amplifier at high volume, which causes an "infinite" vibration of certain string harmonics. A third method, magnetic string drivers like the EBow, can generate string harmonics.
Harmonics are most often played by lightly placing a finger on a string at a nodal point of one of the overtones at the moment when the string is driven. The finger immediately damps all overtones that do not have a node near the location touched. The lowest-pitch overtone dominates the resulting sound.
Harmonics are played every time you pluck a note. Most of the time, however, you do not hear them. What you hear is the fundamental (sometimes called the first harmonic). The fundamental is the loudest sound produced, but it is accompanied by several harmonics. "Playing harmonics" on guitar is actually playing "artificial harmonics." Basically, it is a way of eliminating the fundamental and the other overtones. It produces a nice effect that many guitarists like to use. There are several ways to play these.
Overtones
When a guitar string is plucked normally, the ear tends to hear the fundamental frequency most prominently, colored by the presence of integer multiples of that frequency. The lowest frequency of vibration along the entire length of the string is known as the fundamental, while higher frequencies are referred to as overtones. The fundamental and overtones, when sounded together, are perceived by the listener as a single tone, though the relative prominence of the frequencies varies among instruments, contributing to timbre. A harmonic overtone has evenly spaced nodes along the string, where the string does not move from its resting position.
Find me on:
Facebook: http://www.facebook.com/alexfeather
Twitter: http://www.twitter.com/alexfeather
Website: http://www.thebestguitarplayer.com
Cascade Harmonics - John Huldt