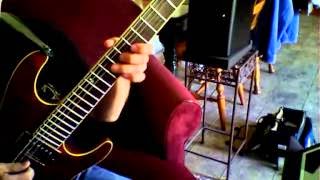 Just working out some ideas over a looped backing track (for personal practice purposes and NOT for sale). Unedited footage archiving linear concepts. To find new ideas and reinforce existing ones, I often do "stream-of-consciousness", extended lines with little or no phrasing. Though at times, rhythmic groupings and choices of subdivisions are explored. The harmonic framework is Cm (Dorian), from which I extend, and stretch, and over which I superimpose tension through a balance of resolution within the inside framework, and altered, tense, outside concepts, based on a chromatic approach and manipulation of 1/2 step movement of simpler, inside structures like intervals and triads, diatonic modes and melodic minor modes, harmonic minor modes; and symmetrical scale structures like half-whole and whole-half diminished, and whole tone. Within those and other scale structures, half step movement is introduced between the whole step blocks that occur throughout. Half step movement is also used with triads and dyads in ascending and descending fashion, often between "like" shapes that occur within the chosen harmonic framework. Chord tones are often encircled above and below prior to resolution and can be linked by doing so to a series of chord tones. Not perfect, but an archive. ALL improvised. I tried to keep my ugly mug out of frame, but I apologize for the brief moments of my face in frame that you might encounter.

This is the re-release on my own label of my C.D. "Freedom".

It is the ONLY legal and official version available for purchase.

ALL other media outlets must be avoided and are being sold WITHOUT my permission, and I have received no PAYMENT from the original release.