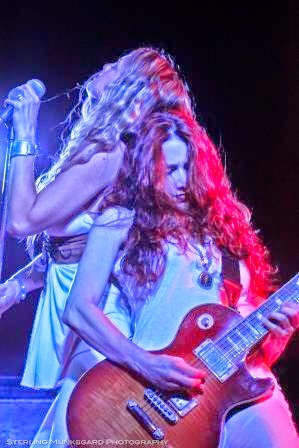 Caligula is the ninth track on the second album of Daniele Gottardo, Non Temperato.
You can order your signed copy at http://www.officialdanielegottardo.com/ or download your digital copy at:
https://itunes.apple.com/album/non-te...
http://www.amazon.com/Non-Temperato-D...
http://www.emusic.com/album/daniele-g...

In composing this track, my idea was to give an effect of power and extravagance, hence the title. The obsessive pedal point is balanced by the harmonic progression, and is developed by the strings. From a formal point of view, it is an attempt to bring a sonata form into the rock idiom. After the exposition of the two central themes, the development involves fragments taken from the elaborate initial themes, first given to the solo violin, and then transposed into harmonic digressions from the very low register by fugato proceedings. The second half is given to the guitar solo. The recapitulation of the main riff, this time accompanied by a march figure in the snare drum, evokes Roman warriors, guided by their tyrannical emperor.

"Non Temperato" is a joining of the electric guitar and a classical orchestral ensemble. It is a hybrid of European-derived harmonies and the distorted sound of American rock music. It is a blend of elements explored in a unique and systematic way. Sound, composition, and imagination create a world of colors for getting lost in the listening.
Daniele Gottardo