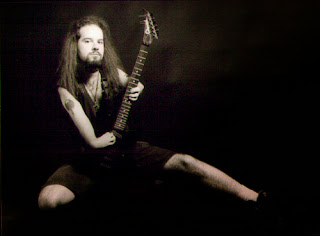 Rick Renstrom became interested in playing guitar at the age of fifteen after being inspired by a Yngwie Malmsteen performance that he saw on television. Some of his biggest guitar influences include Yngwie Malmsteen, Ritchie Blackmore, Uli Jon Roth, Al Di Meola, Andy LaRocque, Ronni Le Tekrø. He also draws influence from classical composers such as Johann Sebastian Bach and Wolfgang Amadeus Mozart. He has worked with several bands and artists throughout his career, most notably Rob Rock and Richard Christy. Rick was instrumental in connecting Richard with Chuck Schuldiner to join Death and Control Denied when Chuck was producing Rick’s previous band. Rick has also appeared on various other compilations. In 2003 he released his debut solo album, Until the Bitter End.