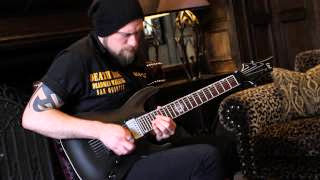 Welcome to the new package for the song the 'Diary of Hells Guitar'. This track actually started off as a collaboration between myself and Jeff Loomis, but as schedules didnt allow I needed a new track to perform on EMGtv at the beginning of 2014. So that is the very first version of it. After sitting with the track a while I started to cement a lot more of how I wanted the track to sound. I booked into the studio with Scott Atkins and recorded the finished version you will hear on this downloadable version. The rest of the track was performed and mixed by Alan Sacha Laskow with the full arrangement written by me. The reason he re-performed my version was so he could do a better mix as in my current home set up I'm not recording dry DI signal. So it all came together to be solidified into this official version of the song and I hope you enjoy it.

BUY the track Nów for just $1

BUY the ;KILLER PACK' and get: