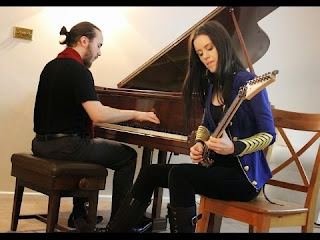 The Commander In Chief´s album "2 Guitars - The Classical Crossover Album" - a cooperation with leading classical guitarist Craig Ogden, is available on iTunes https://itunes.apple.com/gb/album/2-g..., Amazon, CDBaby , etc.
Acclaimed guitarist "The Commander In Chief" playing the theme music from Dragon Age Inquisition, by Trevor Morris, together with her brother William. (Arrangements for piano and guitar by The Commander In Chief and W. Hagen. )
William started to play piano a year ago and is self taught. This is his first music video.
The Commander In Chief is frequently featured in major magazines, with several videos premiering on world leading Guitar World Magazine.
In 2013 and 2014 she had videos on their "top 10 viral videos of the year" lists - both videos were classical pieces of music, normally played by violin virtuosos.
She has been featured as "one of ten modern guitar gods" (Metal Hammer, UK) and "the new queen of shred" (Total Guitar Magazine).