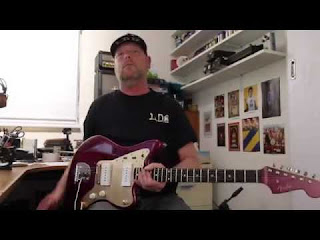 This odd little outing has a background story. I came by this rather cool and rare-ish Japanese J Mascis Jazzmaster last week. I'm told it's rare because it has an alder body and most of the export models were basswood.

At the same time a buddy sent me a hat and T-shirt from Lucifer's Death Squad - a Facebook page dedicated to mostly pre 80's skating, hot rods, bmx, choppers, dragsters and other cool stuff. Ed Roth would have loved it. LDS is most definitely not an occult group although I did add some background musings from Aleister Crowley for my own amusement.

I was fooling around with a preset I'd been writing in the Axe-FX II, full of fuzz, delays, reverse reverbs, etc., which I've now called Lucifer's Death Squad. I'll post the link here a bit later on today for anyone interested in giving it a go.