Alexander Shubin, Lyosha Moguchev: Progeny Of Panthalassa - She Was The Universe - progressive djent from Novgorod, Russia 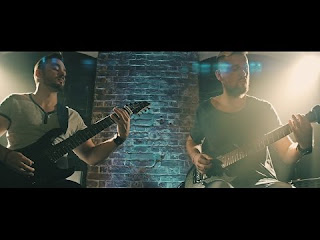 Band was formed in European side of Russia in the beginning of 2012.
Work on debut release was finished in the end of spring.
Song 'Progeny of Panthalassa' was uploaded in June as a preview for upcoming EP.
Self tags such as math metalcore recieved feedback like progressive and even djent.
Guitars reamping for EP made by Gregory Tomao (Tomato Farm Studio)
Debut release 'Whalesong' came out in the middle of the summer 2012 on Delicious Music label.
Also it became available for free download on Bandcamb page.
Band started it's live show sequence immediately.
Next activity with internet single 'Mother Tree' followed in November 2012.
Official lyrics video for this track came out on YouTube later a month.
Band plays single live gigs and works on material for LP at this moment.
Record of LP started in spring 2013 and was finished in spring 2014.
Then during summer post-production was done and the album was released on 28 Oct. 2014

Year: 2015
Band: She Was The Universe (https://swtu.bandcamp.com)
Track: Progeny Of Panthalassa, instrumental.

Audio rec, mix and mastering by Alexander Shubin (She Was The Universe)


SHE WAS THE UNIVERSE "Spirit Fingers" (Guitar Playthrough)