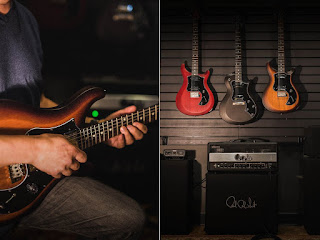 (Stevensville, MD) November 10, 2015 – PRS Guitars is pleased to introduce three new S2 Standard Satin models as part of its 2016 model year announcements: the S2 Standard 22 Satin, S2 Standard 24 Satin, and S2 Singlecut Satin. Each of these models will now be offered in Charcoal, McCarty Tobacco, Vintage Cherry, and Vintage Mahogany satin nitro finishes. Not only does the super thin satin nitro finish enhance the vintage vibe of these guitars, it also allows the warm, balanced resonance of the all-mahogany body to really shine.

“If you look closely, there is no grain filler! PRS lets the nitro-based, clear coat sink right into the wood. It’s about as thin of a finish as you could put on a guitar,” states PRS demonstrator and recording artist, Bryan Ewald. “The protective layer is about 1 mil thick, which is just enough to protect the wood from moisture. The finish on a typical PRS Core or S2 guitar is 9-10 mils thick, so this is a tenth of the thickness of the already super-thin PRS finish. There’s almost nothing choking the wood, so it produces an even more resonant guitar that sustains like crazy!”

When asked about the neck, Ewald offered, “The satin finish gives a great natural, worn-in feel on the neck. The neck feels like it’s been played for years.”

S2 Standard models include the Standard 24, a classic PRS reimaged for players who prefer a stripped-down approach to their music; the Standard 22, which goes in a more vintage direction but remains a bare-bones workhorse for the player who needs to cover a lot of ground; and the Singlecut Standard, which boasts a classic single cutaway body shape and control layout of volume and tone controls for each pickup and a 3-way toggle pickup switch on the upper bout, giving payers plenty of avenues to dial in flawless tone. Designed with the gigging musician in mind, the S2 Standard lineup can effortlessly go from high gain punk and metal to low, bassy blues, making these guitars a solid choice for players who prefer a straightforward approach to a variety of different musical styles.

To explore the S2 Series and to see the new satin finishes, along with the gloss and metallic finish offerings, please visit www.prsguitars.com.

Other notable additions to the PRS 2016 model lineup include: a new Private Stock Archtop model, pickup and color updates across Core models, and two new baritones and two new acoustic models in the SE line. Stay tuned for more details.

Paul Reed Smith Guitars is a leading manufacturer of high quality instruments in Stevensville, Maryland and has provided some of the world’s most renowned musicians with instruments since 1985. The PRS team of highly skilled craftspeople design and build a wide variety of musical instruments and gear for worldwide distribution, including electric, acoustic, and bass guitars as well as boutique-style guitar amplifiers. The PRS SE line of products complements the Maryland-made PRS line by offering highly approachable and more affordable electric and acoustic guitars and guitar amplifiers. Carlos Santana, Mark Tremonti of Alter Bridge, Marty Friedman, Zach Myers and Eric Bass of Shinedown, Orianthi, Dave Knudson of Minus the Bear, Dustie Waring of Between the Buried and Me, 5 Seconds of Summer, Josh Mix of Casting Crowns, and Mark Holcomb of Periphery are among the artists currently playing PRS instruments and/or amplifiers.