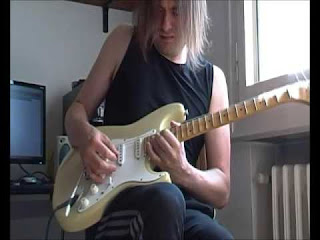 Born the 4th March 1977 in Italy  Luke Fortini starts to play the guitar at the age of 14,his musical influences are: Iron maiden,Guns'n'roses,Ozzy Osbourne,Yngwie Malmsteen,Joe Satriani and all  heavy metal bands. His favourite musical genres are: hard rock,heavy metal,progressive rock metal,
classical music,Jazz and experimental music.

He has played with many bands in all these years. Guitarist for Paul Di Anno from 2002 to 2005(with many gigs around Italy and Europe).  From 2006 to 2007 guitarist for a local cover rock band(with some gigs near the  territory and a win at a local contest).  From January 2008 to February 2009 with a power metal band opening act for some important bands: opening for Seventh Wonder and Circus Maximus(2 gigs in Italy,Rome and Bologna),for Vision Divine(1 gig in Bologna)and for Andrè Matos(1 gig in Torino). Now he has a dedication for the composition and every days makes a lot
of guitar riffs,solos,melodies and many ideas.  Actually he plays in various musical projects in Italy.  The 22 April 2013 signed a deal with UK record company Copro Records/Casket Music for the instrumental release called The Grand Opus. In July 2015 he was one of the guitarists in the project Rockin 1000 and performed the song Learn To Fly (Foo Fighters),the videoclip of the event is on Youtube and has over 25 millions of views.  In September 2015 he was selected for a guitar contest called Maf 2015 in Fiorano Modenese (very important in Italy), a very nice experience and goes to the final with other 2 guitarists,taking the 2nd place.