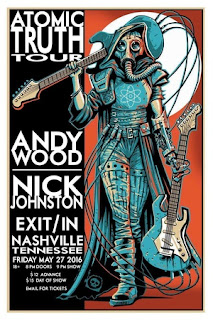 Andy Wood
ANDY WOOD is recognized as part of the forefront of this generation’s top influential guitarists.

Andy is currently performing live with his own band promoting CAUGHT

BETWEEN THE TRUTH AND A LIE, the new double album which showcases Andy’s vast musical influences and abilities.
Andy has toured professionally with a wide range of acts, including most recently Rascal Flatts, Scott Stapp, and Sebastian Bach. Andy’s grandfather “Grampsy” introduced him to the mandolin and bluegrass at

the age of 5. Touring the bluegrass circuit with his cousin and grandfather provided Andy with the necessary exposure that helped refine and sharpen his skills. At the age of 22, Andy was drawn into GUITARMAGGEDON, a guitar contest sponsored by Guitar Center. Andy was a face in the crowd of 3,400 other
contestants, but he made his presence known by being crowned champion of
this prestigious tournament.

As Andy climbs to greater and greater heights, his technical proficiency and tasteful chops make Mr. Wood a force to be reckoned with, and a name you will not forget.

Guest guitar solo on 'The Parade Of Ashes' from Periphery's 'Clear'.