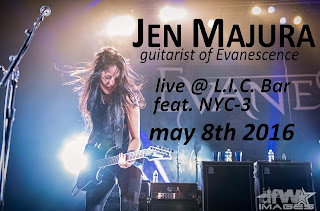 Jen Majura is a German guitarist that got her start touring internationally with German metal band RAGE in 2006. She has achieved many notable milestones in her career, such as being a part of many of the major world wide metal festivals, such as Wacken(DE), Hellfest(FR), 70.000 tons of metal(US) and Graspop(BE), as well as touring all over Europe, made several TV appearances and has completed studio work with BLIND GUARDIAN. In 2012, Jen joined the German band KNORKATOR on guitar. With Jen, KNORKATOR released several albums and DVDs. Later on, she also worked with the pagan metal band EQUILIBRIUM, being their live bassist from May 2014 till November 2015. Jen has released a solo album and also runs a successful music school in Germany. Most recently, she has been announced as the new guitarist for US rock band EVANESCENCE, which made a return to the stage in 2015 co-headlining OzzFest (JP) and touring the US.
For the first time now this lady will be performing her own song material in one of New York's finest venues! She will be joined by her NYC-3 unit featuring Glenn Sheerman (guit), Dave Stark (drums) and Will Jensen (bass).
Don't miss the event - headbang, party and shake hands with Jen.