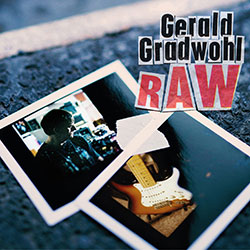 Gerald Gradwohl's musical development with his band the GG group is being followed world-wide, no doubt because of his uniquely expressive virtuose guitar playing, cutting edge compositions, and the high level of musicality his band exhibits, thus for years now placing him at the forefront of the international fusion guitarist scene.

There's no need for him to think methodically about how he should combine rock, jazz, and funk. He simply allows his artistic sensitivity to have free reign, for Gerald Gradwohl thinks, feels and is fusion.

His instrumental work and the compositions breathe as one, and the rock and funk phrasing combined with jazz harmonies are built upon deep earthy grooves, reaching their pinnacle with explosive improvisations.

With his new album "Raw", Gradwohl shows his ability to shape an enormous range of instrumental pieces, rich in content, with ever surprising facets, that are, at the same time a listening pleasure for the audience.

He allows his band to creatively fill the given space with their cooking " don't pin me in" mood, and masterly ability to play together - Breaking out of the mold is allowed!