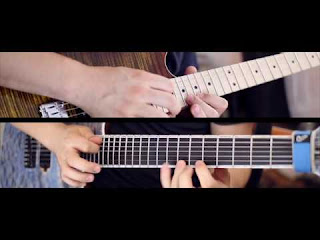 Original composition I recorded for the 2016 Strandberg Competition. The main guitar part was filmed and recorded live off the floor with two DCLR cameras for two different angles. The effect/patch changes on my Axe-Fx II were pre-programmed through protools for playing convenience.
The second guitar part was filmed and recorded separately on another take to demonstrate my full performance.
I hope you enjoy it.

Here's my attempt at another brilliant guitar solo by Tom Quayle.
It's worth mentioning that it's played in perfect fourths tuning (EADGCF)
This is an excerpt from The Lick Library 'Masterclass Monday | Tom Quayle | Chromaticism' lesson and it starts around 6:05:
https://www.youtube.com/watch?v=6aT-N...