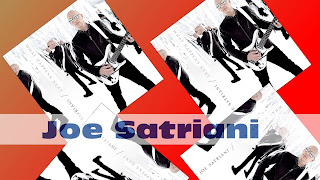 The new, instrumentally electrifying album features a power trio of legendary status; Satriani on guitar and Rock and Roll Hall of Fame inductee bassist Glenn Hughes (Deep Purple/Black Country Communion) and drummer Chad Smith (Red Hot Chili Peppers), the latter reuniting with SATRIANI for the first time since their work in the supergroup Chickenfoot. Satriani is once again joined by producer/engineer/mixer Mike Fraser, his frequent collaborator over the last 20 years, on What Happens Next. Fraser is well-known for recording/mixing every AC/DC album since 1990’s The Razors Edge along with his classic works with Satriani going back to the release of Crystal Planet in 1998.

These new tracks literally vibrate the soul with an energy rarely found these days. From the dynamic opening track, “Energy”, to the majestic crunch of “Thunder High On The Mountain”, and the easy, sensual cords of “Smooth Soul”. This unparalleled rock-rhythm section gives What Happens Next a depth of groove that sets it apart from Satriani’s other work.

Satriani will revive his G3 Tour entity in 2018 beginning March 16th in Moscow and winding up on April 30th in Birmingham playing shows in many European countries, including the UK. France, Italy, Spain, Poland, The Netherlands, Belgium, Czech Republic, Slovakia, Switzerland and more.
Satriani has invited Dream Theater’s John Petrucci and the former Scorpions guitarist Uli Jon Roth to join. Tickets are available from www.ticketline.co.uk and direct from the venues.