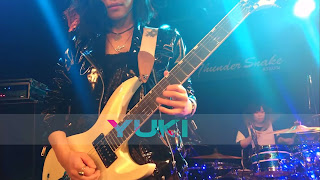 January 14, 2018 live video of D_Drive performed at Kanagawa Atsugi Thunder Snake. It is a D_Drive live arrangement version of "Voices" which is the TV commercial song of Xperia. This picture is actually taken with Xikia's Xperia fixed at the microphone stand and taken. I took it with an in camera. D_Drive performed "Voices" which is TV commercial music of SONY's smartphone Xperia on January 14, 2018.