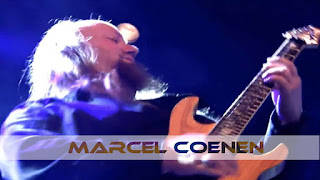 Highly proficient Dutch guitarist Marcel Coenen was first guest on stage, together with Hans Eijkenaar on drums and Michel Van Schie on bass. The song has the working title 'Song 3' and is written for Marcel's upcoming new album. He performed during the SENA European Guitar Awards 2018, hosted for the third time at the Gebouw-T venue, in Bergen op Zoom, The Netherlands on Thursday, April 12th, 2018. Joe Satriani is the 2018 SENA European Guitar Award winner.

Extract from Marcel’s website:
Marcel has been playing guitar since he was 11 years old, he learned a lot as a guitarist, who studied at the conservatory himself, and Marcel developed his technique through his own study. For hours a day Marcel has practiced their licks with records of Iron Maiden, AC / DC, Metallica, Dream Theater, Yngwie Malmsteen, Slayer and video tapes of Paul Gilbert, Scott Henderson, Frank Gambale and Vinnie Moore. Marcel also learned many different styles so that he would become a versatile guitarist.
His specialties are Rock and Metal, Shredden, Blues and Pop. Learning to improvise is also a Marcel specialty. Marcel has been active for more than 30 years as a guitarist in various bands and projects, such as Sun Caged, Stormrider, Channel Zero, The Theater Equation, Christmas Metal Symphony, GODSCUM and Lemur Voice.