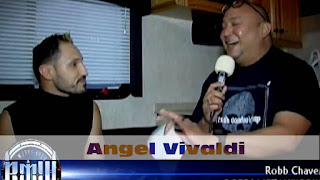 The face of metallic guitar is always in flux & in the past decade we have seen a whole new flock of faces emerging from the woodwork, especially with the commercial advent of 7/8 string guitars. One of the leading faces amongst this new breed is that of New Jersey native & Charvel® Guitars artist, Mr. Angel Vivaldi! Despite beginning his solo career back in 2003, we became enamored with Angel mid last year when he released his most coveted work yet with the dyanamic & melodic opus called 'Synapse'. We took the opportunity to interview him at that time back in November 2017 & what captivated me (& has MANY of his fans as well) is his shining demeanor, his vibrant personality & his positive outlook on life,....ALL of which also shine through his music. Earlier this week we had the opportunity to visit with Angel again as his headline tour (The Melodic Decadence tour) hit Come and Take It Live in Austin. We touched up the wide acceptance of 'Synapse', his upcoming documentary on the 'making of' Synapse, his artistic visuals, plans for his acoustic release, 'Away With Words Pt. 2', what lies ahead for the Fall,...& he even elaborated on some of his personal mantras for being successful in the music industry. I LOVE this piece of work (which is the reason Im releasing it so quickly) because the chemistry between Angel & I really shines through. I hope you will enjoy it as well. ~ El Mero Metal