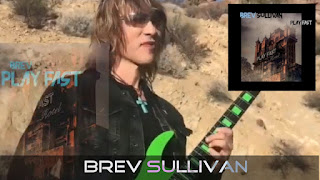 Brev Sullivan’s ‘Play Fast’ song collection is a whirlwind trip through a myriad of guitar styles. The songs ooze a bit of modern prog rock mixed with a classic flair and will definitely satisfy technical guitar enthusiasts. While ‘Play Fast ‘is the appropriate title for the Florida based guitarist’s instrumental album don’t judge a CD by it’s cover. There is a timeless finesse mixed in the with guitar pyrotechnics. Groove to the ballad ‘Fawn’ that borrows from the classic fusion tones of the Larry carlton, Jeff Beck catalogue. 80’s arena rock fans will dig ‘Vito’ a melodic rock salute to one of rock’s most iconic guitarists Vito Bratta of the band White Lion. Dig in for a deeper listen for some chicken pickin’, acoustic, and some unique soundscapes with the cuts ‘Movie’ ; pure movie soundtrack material, and the dirty- synth driven track ‘Ultrafest’, a guitar salute to the sounds of the DJs of Ultrafest. A huge music event held annually in South Florida.
Brev has appeared in guitar player magazine, appeared in Rock of Ages as a guitarist with Tom Cruise (Warner Bros 2012) and is the son of acclaimed Jazz legend Multi- Instrumentalist ira Sullivan.