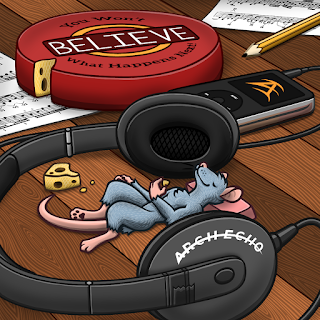 Arch Echo is back in action with their second full length album, "You Won't Believe What Happens Next!".

Since making waves in the scene two years ago with their self titled debut, Arch Echo has been crafting a follow up which they feel is their best work to date. "There was so much excitement behind the creation of this release," says drummer Richie. "This is the purest form of Arch Echo, and I hope you enjoy every second of it."

On "You Won't Believe What Happens Next!", Arch Echo continues to deepen and fine tune their brand of instrumental progressive metal with blistering harmony leads and crushing riffs. Songs like "Daybreak" and album ender "Iris" feature soaring melodies and catchy themes while dizzying riffs on "Immediate Results!" and "Mukduk" show that the band isn't finished exploring the limits of their capabilities.

Arch Echo is planning to tour the new album extensively. The first tour begins in late May as they tour North America as direct support and rhythm section for guitar legend Tony Macalpine.