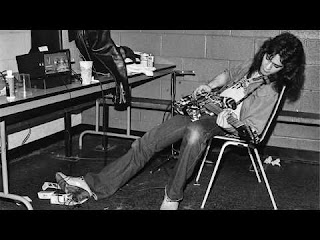 Guitar Player magazine charged Jas Obrecht with the task of interviewing EVH about the Diver Down album. Obrecht called EVH in his hotel room after the Louisville, KY performance and asked him about the tracks on Diver Down, but the conversation ranged beyond that one subject. When you listen, you can hear EVH rip both Roth and Templeman (thereby foreshadowing the band's breakup) and the band's relationship with Warner Brothers. For those of you that have the Best of Guitar Player: Van Halen issue (published in the mid-90s) or the original run of the interview in GP (circa late 82), you can follow the conversation as it progressed, but you can also hear the stuff that Obrecht edited out on the behalf of EVH; namely, all the comments that are critical of members of VH's inner circle.

The interview has the added treat of the inclusion of the a demo for Jump and a bit of EVH noodling on the guitar as he tries to explain to Obrecht how he pulled of the intro to "Little Guitars."

The quality here is the quality of a phone call. It is not like an FM interview, but it is easy to listen to and in some ways adds to the sense that you are eavesdropping on a private conversation.