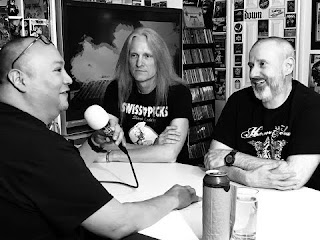 Whenever possible I've always taken every opportunity to champion the San Antonio 80's metal scene, as was evident by last Summer's triumphant event, 'Return To The Metal Capital'. And, as with all scenes in all era's there is the first wave that hits (with bands like Watchtower, Militia & Helstar), but also that 2nd round of bands which come on in, add more depth & continue to carry the torch. Metal warlords, SA Valkyrie is one of those bands! 30 years later the band has reunited after a short lived stint beginnig in 1985 & have just released a NEW recording of their classic, progressive-thrash demo, 'Choosers of the Slain'. So when original members vocalist, Joe Gregory & guitarist, Scott Stine were ready to sit down & share all the good news I was fortunate enough to have them in the RMW Studio to do so. This interview which took place on February 7th, 2020 begins by reminiscing about the 80's SA scene & how Valkyrie adjusted to the ropes with the help of some of the aforementioned bands to also include Wyzard & Rotting Corpse. In addtion, Joe & Scott share about re-recording their demo, why the return after so many years, NEW music, playing live & what the plans are for 2020. Hope all of my ol'school rockers out there dig this one! Enjoy! ~ El Mero Metal