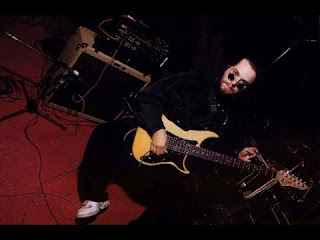 The Powers of Ten Band's third performance ever.
The full 1992 Guitar Clinic that was held for Memphis Guitars, the shop downstairs from Sounds Good recording which, as you can see, was still in the process of being built.
There are small clips of this out there that were shot from another angle and are of much better color quality.
Not sure if that camera ran the entire time.
This angle was shot from the loft above, by the studio owner, who you hear in the beginning talking about the iris settings on the camera which improves a LITTLE after a while and the image brightens up..
I tried to restore it that best I could but the quality is what it is.
Shawn tells everybody who is playing and as you see, Sean Rickman was late and takes over on the drums.
Barry Bays on Bass
Doug Scarborough on Keys
Tommy Bobo on Sax
Sean Rickman on Drums
Brandon (?) on Drums


"For all the geeks out there: Shawn's playing West Side Boogie through the Gjika Gold Amp. In the background, Eddie Van Halen's Marshall "zen boy", used on Get You Back. For Get You Back, he's using his Jackson Archtop 1991 Limited."
Thanks to Fabio Stabel for that bit of information!