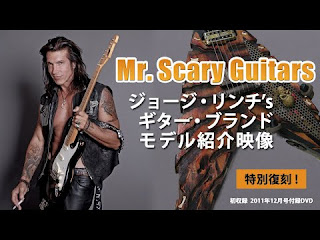 George Lynch uses a workshop in his home to make a guitar under the brand "Mr. Scary Guitars". It's a rare brand in the world where fans can interact directly with George to order from the looks, because they are all very unique models. George used to introduce the workshop that produced these models through images linked with the magazine of Young Guitar (December 2011 issue, recorded in the appendix DVD at that time), but the image is It is currently difficult to obtain. So, let's deliver a special reprint at this timing to commemorate the 30th anniversary of Lynch Mob's debut. Featured on the 30th anniversary of Lynch Mobb in the Young Guitar September 2020 issue! Details:https://youngguitar.jp/yg/yg-202009
Purchase:https://amzn.to/2OX77ci