News:
03-03-2008:
Jeyson Zimerer with some more demos, the guitar used was a custom made scalloped strat, and the overdub session was recorded with the seven string one.

04-12-2007:
Jeyson Zimerer does in his own left hand inverted guitar style a tribute to the late great Shawn Lane. Jeyson says:

just a little tribute to the master Shawn Lane. I really love this song. Rest in peace Shawn...

25-11-2007:
Jeyson Zimerer reminds me he is in the process of recording some new tracks, having just released his new CD called cinema. Visit jeysonzimerer.blogspot.com for more details of what Jeyson is doing.

23-11-2007:
Guitarist Jeyson Zimerer back again on six and seven string guitar, using some legato playing and speed picking at jzrecords.


05-07-2007:
OK...cool no soon as posted then the first of the video's for Greg Howe's new competion is being posted. Check out Jeyson in full improvisation flow:


19-06-2007:
Jeyson Zimerer with some fluid playing for the solo of "o outro lado" performed by TJ Helmerich on the new "serj´s" CD, liquid piece of me.

korn got the life


05-02-2007:
JZ has added some music to jeysonzimerer.blogspot.com. Jeyson is in the process of putting together a new CD to be released on his own JZrecords independent label: http://br.geocities.com/studiojzrecords 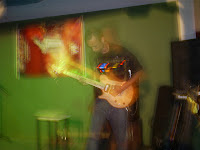 29-01-2007:
Jeyson Zimerer is back in 2007 working...working...working...on a new CD. Also Jeyson joins the blogging fraternity with his own blog: jeysonzimerer.blogspot.com The blog features links to his new videos, from his DVD "A Night At The Theater"... He says:

In Brazil we are passing by a rainy week...so the solution is play guitar all the time....


20-08-2006:
Jeyson Zimerer has updated his web site with new pictures and information. He is currently finishing a new CD entitled "Digital Mythology". He also has a live video in DVD format in the works.


25-06-2006:
Jeyson Zimerer has moved web sites and is currently developing content. He is also in the process of putting together an independent instrumental project "Eletronic, Rock Fusion" on JZrecords in 2006.


You can also listen to his music on his web site.

Background:
Brazilian born Jeyson Zimerer, is one of many guitarists who are blossoming in South America. He reminded me that there are many players that could easily feature on these pages. He is a multi-instrumentalist playing guitars, bass, keyboards, samplers and does drum programming. He enjoys a broad spectrum of influences, from the Brisish band Marillion to players like Eddie Van Halen as band.

More recently he has added a more fusion edge to his playing citing players like Greg Howe, Ritchie Kotzen, Scott Henderson and Tribal Tech, Allan Holdsworth, Tomati Trio, Vital Tech Tones, and Frank Gambale. He did work with Frank Gambale for one week when he attended guitar tech.

He has made a number of instrumental releases, Check out his own Studio JZ records web site.