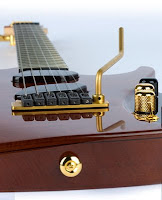 
The Moog Guitar puts revolutionary new technology in the hands of the guitarist. Moog Music is known for building the finest instruments and the Moog Guitar is first and foremost a very fine guitar; designed to be played by the best musicians as their primary axe. Its AAAAA maple top, mahogany body and ebony finger board bespeak the quality that musicians have come to expect from a Moog instrument.

The addition of Moog Guitar Electronics opens guitarists to a whole new musical vocabulary: Not a guitar synthesizer, not a MIDI guitar or an effects processor; players are intimately connected to The Moog Guitar because it works its magic on the strings themselves.

Info
What makes this guitar so special?

FULL SUSTAIN MODE - like no other sustainer; infinite sustain on every string, at every fret position and at any volume. You may have heard sustain before but not with this power (we call it "Vo Power")and clarity.

CONTROLLED SUSTAIN MODE - allows you to play sustained single or polyphonic lines without muting technique. The Moog Guitar sustains the notes you are playing while actively muting the strings you are not playing.

MUTE MODE - removes energy from the strings, resulting in a variety of staccato articulations. The mute mode has never been heard on any other guitar; the Vo Power stops the strings with the same intensity that it sustains them. You feel the instrument transform in your hands.

HARMONIC BLENDS - use the included foot pedal to shift the positive energy of Vo Power in Sustain mode and the subtractive force of Vo Power in Mute mode between the bridge and neck pick-ups to pull both subtle and dramatic harmonics from the strings.

MOOG FILTER - control the frequency of the built-in, resonant Moog ladder filter using the foot pedal or a CV Input.

There are five knobs:

Vo Power this is the amount of coherent power that is applied to the strings to either sustain or mute them.

Piezo Blend blends the piezo output with the Moog pick-ups.

Master Volume controls overall volume including both the Moog Pick-up output as well as the piezos.

Tone/Filter controls both tone and the resonance of the Moog ladder filter dependent upon the position of the Filter Mode Toggle switch.


There are three switches:

Moog Guitar Mode determines the application of the Vo Power. There are three positions: Sustain, Controlled Sustain, and Mute

Five Position Pick-up Selector Switch: Piezo, Bridge only, Out of Phase, In Phase, Neck only.

FAQ
Who invented it?

The basic technology behind the Moog Guitar Electronics is from Moog Associate and inventor, Paul Vo.

What Models will be available?

The initial release is the Paul Vo Collector Edition.

Did Bob have anything to do with it?

Bob and Moog President Mike Adams often spoke of entering the guitar market, but it was not until Paul brought this idea forward that we felt we had something truly innovative to bring the market. Some may know that when Moog and Gibson were both part of Norlin (in the 70's), Bob actually worked with Gibson and they jointly created the Gibson RD Artist Guitar. So Bob's interest in technology and the guitar was nothing new.

Who designed the actual Guitar?

The guitar is collaborative design between Moog Engineering, Paul Vo, and Dale Brown of Zion Guitars.

Is Moog building the guitar?

Initially Zion Guitars will be building the Paul Vo Collector Edition Guitars. Depending on demand, the build may shift to other North American luthiers. The guitars will then be shipped to Moog where the electronics will be installed and final set-up and intonation will occur by Moog's in-house luthier, Doug Wyatt.

Tell me about the Paul Vo Collector Edition.

What finishes are available?

Can I change out the pickups?

The Moog Pick-ups are the heart of our system. They cannot be changed.

The Moog strings that come with guitar have a specific metallurgy designed to work with the Moog Pick-ups. Other strings will work in emergency situations but the guitar will respond best with Moog strings.

What gauge strings will be available?

Can I get a bolt-on neck?

At the present time this technology does not allow for a bolt-on design.

Can I customize the guitar (neck, hardware, bridge, etc.)?

At some point we will have a Custom shop capability, but for the foreseeable future, the guitar will be built as specified.