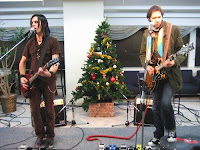 I think the starting point was, I went back to Pennsylvania to visit my dad. My dad had a party, and a couple of my musician friends that I grew up with, were there. One of the guys gave me his demo. This guy had actually been playing guitar with Freddie at the time. I got home, listened to the demo, and I was like ‘man, who’s singing on this! It’s fantastic!’ and it turned out it was Freddie. I was ‘oh, I always heard about Freddie…’ I left to go to California before we ever had a chance to meet. And I didn’t know he was a singer. I just knew he was a great guitar player. That sort of planted the idea in my head. Like if ‘I ever want to do some singing again, this would be the guy…’ So, after having done a couple of instrumental albums, I started thinking… I really feel like my guitar playing has improved, from being able to focus on the guitar. But (smiling now) I thought if I go back to vocal music, I think my guitar level is here (higher) and my vocal level is here (lower). I need the vocals to go higher. And the only way I can do it…