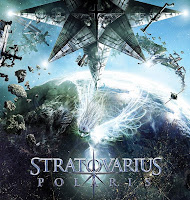 "Polaris" is Stratovarius' first new studio album in four years. The Helsinki-based band's forthcoming album is part of worldwide release by the band's new label partner edel under the new imprint earMUSIC outside of Asia and the band's long time label partner for Asia, JVC.

Originally formed in 1983, Stratovarius' current keyboardist, Jens Johansson, is a world-renowned power metal keyboardist and pianist in his own right. He's regarded as one of the first and most influential "shred" keyboardists, for his high-speed neoclassical and fusion style.

"We're pleased to have joined forces with an exciting new label who believe in the band," says Johansson. "This is a new era for Stratovarius and I can't wait to hit the road again and meet all fans who supported us through all our good and bad times."

In September 2008, unleashed from many burdens of negativity, the band found the freedom to go into seclusion for almost a month in a cottage by the sea in a Finnish forest to relax, laugh, write songs, be creative, and record. Suddenly, they found themselves as a band reborn.

"Polaris" is a result of a melodic, powerful, fresh, tight, and technically elaborate new collaboration. Originally recorded during the fall 2008 at Hästholmen and 5by5 studios, Helsinki, Finland, the new album was mixed by studio engineer, Mikko Karmila - a long-time confidant of the band.

"Polaris is a positive, powerful album that Stratovarius fans all over the world are certain to take to their hearts," reflects vocalist Timo Kotipelto.

The band will support the release of their new studio album with live shows around the globe. The world tour will start in the UK.