on April 19, 2009
News:
19-04-2009:
I thought I would have a look at the current top 5 as I type. There is a lot of negative comment going on on youtube for the top 3 artists, with people accusing others of cheating etc... so no change from last years guitar idol then... more interesting to me are the number of times favourites and the number of times the video has been rated and the total over all views.

Unfortunately you can get access to the actual video stats as this would also indicate how well a video performs, if people actually watch the video to the end. Here is an example of Daniele Gottardo's Rock Fusion video which has the highest watched ratings of all my videos. Notice how people watch to the end or start in the middle to watch the end: 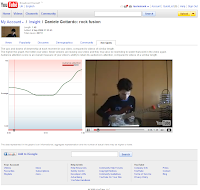 As these are the top 5 I thought I'd compare the statistics with a number of 2008 finalists to see if there was any relationship between the votes and YouTube statistics. My finders are not scientifically conclusive, but anecdotally indicates to me that the over all voting in the final may not be fully indicative of the actual quality of players... If I had time it would be good to review some more. Fortunately there is a guitar panel who select the majority of finalists, so hopefully any anomaly will be ironed out.