This little guy has been working his butt off to get votes, playing concerts, schools, churches and shows all over Guatemala, plus he's got a lot of talent for a young guy! Great to see him in the final. The other finalists

Hedras Ramos - Insanity of the Atoms (entry for Guitar Idol 2009)


Help him pay his way over by buying some CD's and the Blues Jam tracks: 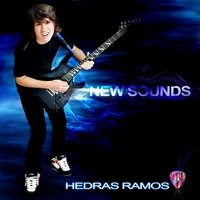 HEDRAS RAMOS - ROCK SERIES 1
Let's hear it for our first special guest from Guatemala! Hedras Ramos might only be 17, but he plays with the feel and confidence of an experienced master. His first bluesjamtracks project features three rock/metal pieces, all with lots of juicy melodies and insanely cool tapping licks. There are two solo jams (Metal Heart and Hard Nut) plus a complete composition, Insanity of the Atoms, which is Hedras's entry in Guitar Idol 2009. All three tracks come in audio and video form, along with backing tracks and accurate Tab transcriptions. In addition, there are extended jam tracks based on Metal Heart and Hard Nut

This track is Hedras's entry for Guitar Idol 2009, and is included with a full backing track and full Tab! Vote for Hedras http://www.guitaridol.tv/online_final/entry/insanity_atoms
guitar idol Hedras Ramos