"What differentiates this recording from "Suspension Of Disbelief"? For a start, Orbital Attempt is a much heavier sounding album. The tracks just took on a life of their own, dictating the final form and function of the completed recording. Another major difference is that I assumed the role of producer to a much greater extent this time around. Co-producer Bob Katsionis was always there to "gently" let me know when I was "seriously messing up" the tracks, but I decided to follow my own personal artistic instincts and inject my own style as much as possible. I am also deeply honored to have two amazing arists as guest soloists - Brett Garsed and Kiko Louriero. Both accepted my invitation to trade solos on a couple of tracks." 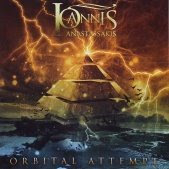