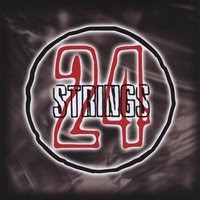 Guglielmo Malusardi: Of course is not all the music played with the 8-string guitar. Would you list the guitars used by each of you?

Stefano "Sebo" Xotta: Here are the songs on which we used the RG2228 8-string guitar: "Introspective", "Outraged Dimensions", "G String Song", "Flown" and "Go Down Peter". Then we have two songs with a 7-string guitar based riff, they are: "Schizophrenic Disorders" and "Double D". On these and all the other tracks we also used various 6-string guitars, here is a complete description of our guitars set for this album:

Gianluca Ferro: I used the RG2228 on "Outraged Dimensions" and "Go Down Peter", the other instruments I played were an Ibanez RG1527 and an old RG550 with Seymour Duncan pick ups.

Frank Caruso: I used the RG2228 on the intro to "Introspective", "Outraged Dimensions" and "Go Down Peter", then I used an Ibanez 7-String 7321, an RG2550 Prestige and one Ibanez S Series.

Guglielmo Malusardi: What do you admire the most of each other?

Stefano "Sebo" Xotta: Well, we love our styles and we respect each other a lot! We're not rivals at all, we're conscious our project is different because of the three different styles, so we don't wanna try to play the same, we're proud of our own things and that represents our originality on this project! I think Gian has a terrific technique, I define his style as a liquid one, because it seems his notes are falling like water from a cascade, very fluid! He is the most "complicated" of the band harmonically and compositionally speaking. I could make a whole album with the ideas he puts on one song!

Frank is a great shredder as well, and old and new influences are perfectly mixed in his style. He is very precise, very tasty and very talented as a sound engineer too! My style is the most classic rock, I'm considered a shredder due to this album, but I could be compared to Gary Moore if I recorded solo! I love tone, I love fixed bridge guitars that let you have that bite on riffs and very powerful double note bendings!

Gianluca Ferro: Being honest, a lot of things! Sebo has a powerful style and he's able to always find the right notes, he has great taste! Frank is a very technical player, but sometimes I'm impressed by his expressive ability! He's a master with the combination of half tone bending/slide and hammer on/pull off!

Frank Caruso: Gian is a funabolic player; he's able to create impossible phrases, but always clear and precise. His style is always funny and dynamic, like his mind! Sebo has a killer vibrato, his pentatonic is always powerful and his phrasing is never obvious, he's a great riff machine! I have maximum respect for both of them, every one of us knows when he has to step back to leave space for the other guys, that's so important!