on January 24, 2010
A super cool interview by my super cool guitar buddy Mike Blackburn... now this is what I call an interview... lots of words and many of them related to guitar... read on Mc Duff! 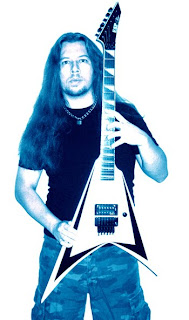 Do you come from a musical family?
No, I am the first and only musician/artist in my family.

What music was heard in the home?
In my childhood days mainly the radio and whatever was played on it, like some pop stuff. Later on when I started to play guitar, albums that I would buy were heard at home.

What was your earliest instrument and did you take any lessons?
The guitar was my first and only instrument. I learned a few basic chords and melodies from some friends in the very beginning. After that, I was self-taught trying to learn by ear the solos and songs of my musical heroes from their albums. There was nobody in Serbia from whom I could have learned this kind of stuff that I play today because nobody before me played it over there. It would have been cool if I could have went and learned at a place like Berkley or MIT schools where they have great teachers for kids who have the cash to pay for it - but my parents didn’t have the money for that kind of stuff.

When you got your first guitar at 11, what inspired the acquisition and what type was it?
I spent a part of my childhood in London, England and those few years were quite significant on my development from a cultural influence point of view. That’s where I first encountered the guitar by chance and was quite fascinated with it and wondered if I could ever learn to play such an instrument. After coming back to Serbia I discovered Rock music which was mainly sung in the English language and that to me somehow made a connection to my London days so I got into rock guitar very deeply and quickly… The very first guitar I got was some cheap acoustic that I asked my grandfather to get me for Christmas. A couple of years later I worked during the summer vacation picking fruit at some plantation around Belgrade (capitol of Serbia) to get money to buy a second hand east European Telecaster knock off type of guitar… That was my first electric guitar that I learned to play on.