on June 09, 2010
Concrete Lake first made alliance in 2007 at Brighton Institute of Modern Music. The band was created to fulfill missing pieces for many souls that reach and delve a little further than others. Not only do the band explore the depths of melody, rhythms and ambiguity they also aim there visions of classic well written hard foot tapping head banging rock to the millions of people who seek fun and enjoyment in their music. 2010 will be a turn in a fresh positive direction for where this band heads in the future! So watch out mothers!
Luke Machin - (Composer, Lead Vocalist & Guitarist) owned his first guitar at the age of 2 and hasn't put it down since! Up to this date Luke is in his final year studying a BA Hons Degree at Brighton Institute of Modern Music, and just received an award for BIMM Student of the year! Most recently Luke has been honored to play with the guitar legend JEFF BECK and has been a part of Francis Dunnery's "New Progressive's" Project where he played alongside his guitar hero Francis Dunnery and other very special guests such as, Steve Rothery, Theo Travis, Bernie Marsden and ROBERT PLANT. Luke is also guitarist for the new up and coming Progressive Metal band TERRAFORM. Luke has just also been asked to join "Andy Tillisons" amazing Prog Rock band "The Tangent" who are now playing concerts and venues in and out of the country. 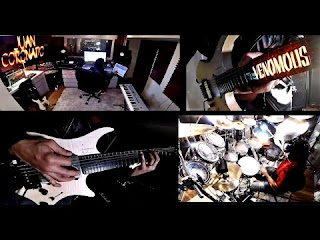