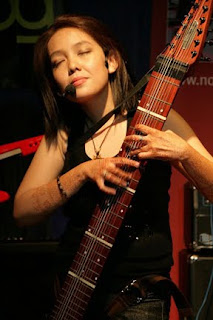 Fuseboxx is a 4-piece Pinoy (Filipino) Progressive Rock Band formed in 2001.
Their existence became an inspiration that opened the doors to progressive music in the Philippines. 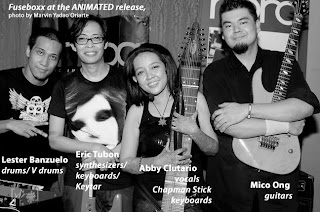 feature and interview by Greg Howard

There aren't many progressive rock bands in The Phillipines, nor are there many prog bands in the world that are fronted by a woman vocalist (singing in Filipino and English at that). And though the number of women playing The Stick continues to rise, they are still a definite minority.

Novelties are not what you'll notice about this band, but rather their unique sound and powerful performances. It's great to hear a compelling vocalist, weaving her own bass and melody lines into such a lush and layered sound. Fuseboxx's chemistry is undeniable. Though Abby's move to The Stick is fairly recent, her visual and sonic presence with the instrument is as natural any veteran player's.

Fuseboxx has just launched their second release, ANIMATED, to enthusiastic reviews and fan reaction. I was able to chat via Facebook with the Abby about her new role in the band and future plans with The Stick. more : http://www.stick.com/features/artist/