Top Ten: 10 slabs of monstrous guitar for your collection 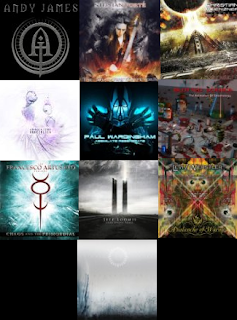 You know what will happen... all the wrong CD's will turn up at Christmas... what you didn't want the X Factor Christmas album? But you did get some cash from that auntie that had more sense... you know the one who knows that you know what music you like more than anyone else... Well if that's the case, you know you love state of the art chops, you can't remember which album you should get with that Christmas stash... well here you go... all these albums have spent a good deal of time on my mp3 player and get the Truth In Shredding seal of Top Notch Shredding approval.


Stéphan Forté, Adagio's maestro artisan back with some deadly licks and scary chops!

Tosin Abasi, Javier Reyes how about 8 string heavy and beautiful?

Avalanche of Worms, Levi/Werstler's first release on Magna Carta Records, delivers a commanding sonic statement from the the partnership of Daath's Eyal Levi and Emil Werstler.