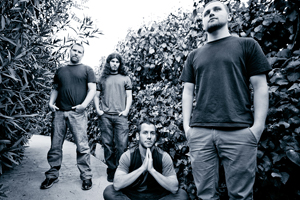 It’s been a long time since Cynic played in London (last time being 3 years ago as a support act for Opeth), but it was worth the wait for their headline show on 5/12/11 at the Garage. Got there just in time for the second half of Chimp Spanner’s set (main support), a 4-piece progressive instrumental band – featuring some good lead work from Paul Antonio Ortiz, on top of heavy riffs and a drummer that really rocks on stage.


Cynic came on around 9.30 with an unusual stage setup as Sean Reinert had his drums sideways on the left side of the stage, with Brandon Giffin (bass) in front of him, Max Phelps (vocals/guitar) in the middle and Paul Masvidal on the far right.

As expected, the audience was quite diverse and not only consisting of the typical metal fans. The set starts with a couple of songs from their new EP, Carbon Based Anatomy, and goes on to include their most well known songs from Focus (“How Could I”, “Veil of Maya” and “Celestial Voyage”), Traced in Air (“Evolutionary Sleeper”, “King of Those Who Know” and “Adam's Murmur”) and their last EP, Re-Traced.


The sonic quality of the venue is amazing, with the guitars perfectly balanced with the vocals as well as any additional pads played on the backing track. Masvidal’s chorus-based clean guitar sound, melodic solos and typical use of the vocoder effect combined with Phelps’ growling deliver the distinct Cynic sound. With their main set lasting for just over an hour, they saved my personal favourite from Traced in Air, “The Space for This”, for the encore. Once again and despite their generally static stage presence, Cynic proved that they are the masters of progressive/fusion/intellectual metal, capable of performing it live flawlessly and with good response from the crowd.