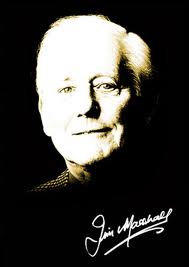 One of Milton Keynes most famous people, Jim Marshall, has died at the age of 88. JIM Marshall OBE, the pioneering inventor behind Marshall Amplifiers and the man known as ‘The Father of Loud’, has died aged 88.

Mr Marshall devised and sold his first amps from a small shop in Hanwell’s Uxbridge Road in the mid 1960s. Guitar legend Jimi Hendrix was just one of the people who bought an amp from him personally.


His name lives on all around the world... RIP

A very sad day for the Marshall family. My thoughts and prayers go out to Paul and his family. Rest in Peace Jim Marshall OBE...

Slash ‏ @Slash
The news of Jim Marshall passing is deeply saddening. R & R will never be the same w/out him. But, his amps will live on FOREVER! \,,/,

Bumblefoot ‏ @bumblefoot
RIP Jim Marshall. THANK YOU for the decades of giving guitarists their sound...

Nikki Sixx ‏ @NikkiSixx
R.I.P. Jim Marshall. You were responsible for some of the greatest audio moments in music's history and 50% of all our hearing loss......

Scott Ian ‏ @Scott_Ian
Just heard about Jim Marshall passing... I am lucky to have spent time with the man that created the sound of Rock music. A true LEGEND.
Gibson ‏ @GibsonGuitarCA
RIP Jim Marshall

Jim Dunlop USA ‏ @jimdunlopusa
RIP Jim Marshall, a.k.a. The Father of Loud. We're deeply saddened to hear of his passing & we'll miss him very much.

ESP Guitars ‏ @ESPGuitarsUSA
ESP salutes Jim Marshall, who passed away today at age 88. Many great songs paired an ESP guitar & a Marshall amp. He will be missed. RIP!

Sad to hear about the death of the king of loud, Mr Jim Marshall

Dave Mustaine ‏ @DaveMustaine
I have never been sadder than today. My dear friend and father figure Dr. Jim Marshall OBE has passed away. I am at a loss for words...

Neil Zaza ‏ @neilzaza
RIP Jim Marshall. You've left a positive mark on every guitarist w/ your work & the legacy you've left us. This one goes to 11

Phil Hilborne
RIP Jim Marshall - The Father Of Loud and a good friend for many, many years. It's a very sad day today.... Jim kindly gave me this back in 2008 - His fave tipple for sure…This goes to 11 too.. 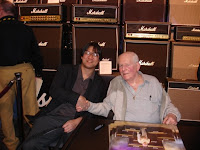 Roy Marchbank
RIP Jim Marshall, your contribution to the world of guitar speaks for itself.. 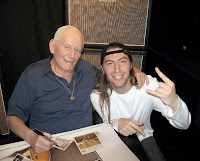 Jeremy Krull
A (very very loud) moment of silence for Mr. Marshall. Hell of a way to wake today...such a bummer.

Ivan Chopik
R.I.P. Jim Marshall. I very fondly remember the day I got my JCM2000. Thank you for the sound you've given to the world of rock - your spirit lives on through it!

Andrea Strazzabosco Gottardo
We talked so much that day... it was so fun....first amp used by Lorenzo Gottardo(and then of course by Daniele Gottardo ) was a Marshall, thank you!

Yvi Wylde
For 10 years I play almost exclusively Marshall and I am pleased so closely with this company be allowed to work together!
I am pleased to have Jim Marshall learned to know personally.
Today, unfortunately, he had to go from us ...

Dear Jim,
I hope your legacy will be guided so on, as you'd like!
Rest in peace and one day, we're gonna meet again! 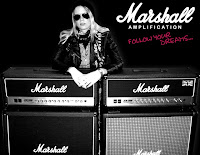 Today left us a character who has made an amazing contribution to music and all theguitarists in the world. The inventor of a sound that has made entire generations dream and play ...

Rob Chapman
Marshall Thousand Amp Salute
Guys I've been thinking about Jim Marshall...
If you own a Marshall amp (Or even if you don't) , let's all unite and give a bit fat global A chord in Jim's honour, like a thousand amp salute.
I'm going to do it at 8PM Uk time tonight... maybe tell everyone would would care.
I met Jim a few times, lovely guy... grip like an Ox and time for anyone. I think he'd approve if this.

Adam Ironside
RIP Jim Marshall! Someone who shaped not only the sound of, but some of the culture of popular music. Today we should all play in 10.

RIP Jim Marshall. Thank you for producing the best amplifiers known to man and I will be blowing the windows out in my house with my Marshall stack today!
Jim Marshall rip