on July 14, 2012
I thought it might be useful for you to get a little background on the lead guitarist, the driving force behind the latest Linear Sphere release, Martin Goulding.

At the age of 15, Martin studied with local teacher Robert McChesney for three years, before attending the Guitar Institute of Technology (G.I.T.) in London where he completed a diploma, graduating in 1993. Keen to further his expertise in modern rock techniques and jazz/rock improvisation, Martin went on to study privately with top UK virtuoso, teacher and genuine underground guitar god Shaun Baxter. 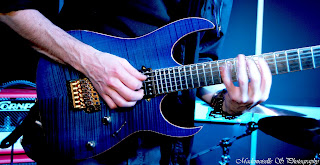 Martin Goulding is now a Professional Guitarist/Teacher/Producer based in London, UK www.martingoulding.com and is one of the UK's foremost Modern Rock/Metal guitar instructors, Martin Goulding teaches at The Institute of Contemporary Music Performance (formerly The Guitar Institute) in North West London, writing the course for Rock Studies.

As well as a sort after clinician and he's been a regular writer for Guitar Techniques magazine and Guitar World magazine. In addition, Martin is an experienced session musician with clients including Chappell Recorded Music Library, Bruton Music, Zomba, Unity and the BBC.

Martin also writes, engineers and produces for Linear Sphere who released their highly acclaimed debut Reality Dysfunction in 2004 and have just released their second album Manvantara in early 2012.


You get get both albums for one great price and there are a limited number of signed copies of the new album for the first hundred ordered.

Linear Sphere been forged  from some of UK's finest musicians with Martin Goulding on guitar, Jamie Brooks on keyboard, Steve Woodcock on bass and Chapman stick, Nick Lowczowski on drums and Jos Geron on vocals. The band carve out a melodically rich seam of progressive metal, and no doubt live these guys must excel.


The Concept talks of Atlantis and Lemuria and interestingly enough there are connections with the concepts of Manvantara and the concepts of Prometheus in that the album talks about the golden age of Lemuria, where genetic experiments combine DNA of native earth man with a cosmic race which must be successful to ensure the survival of the species, giving birth to modern man.

The CD comes packed with a booklet containing the lyrics of each song and this is further augmented by on line content which explains the concepts in more detail... now this is a real concept album in every sense of the word. Not only can you listen to the top line music and singing, but you get a chance to read about the lyrical synopsis for each track, indeed I enjoyed looking up references on the web whilst listening to some of the best metal progressive musicianship around. 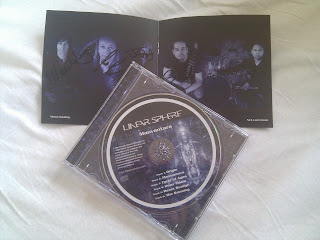 This is the sort of release that requires in depth listening, the sort I like to have on in the background whilst I'm working. The sort of album that I term a "grower", an album that gets better and better with repeated listening.  There's nothing throw away here, it's been a number of years in the making and no doubt all the better for it. All seems to gel in an appropriate way, it's like someone took the progression of Cynic, mashed it with mega metal melody, and added some the the finest, fluid guitar metal on the planet.  The vocals of  Jos Geron are a darker blend of Warrel Dane, from Nevermore, and a bruising Geoff Tate, formerly of a band called Queensrÿche.

The production is great as well, with Martin Goulding engineering and producing what is a well balanced mix, not too compressed and dense (as tends to be the norm at present) and this has been captured in the final CD mastering by the renowned Alan Douches at WWSM in New York.

If you like your metal in the progressive mould, the sort with tracks weighing in above the five minute mark, but not so complex and dense that you get lost, then this is going to be for you. I also have I've no hesitation in recommending this album to guitar fans too as Martin Goulding is one of the best metal players in the UK right now.