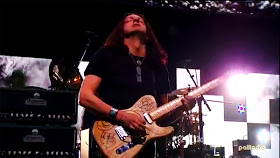 Kilminster: (chuckling) "I was pretty scared, actually! When I first read on the website that it was going to be broadcast to over a billion people, I just sat there in a state of shock for a little while.

"As we got closer and we rehearsed, it was sounding really good - especially after we sound checked that afternoon. Everything just felt really nice, really comfortable, and it wasn't as cold as I'd remembered it being previously, because it is a hockey arena, and sometimes it gets a bit chilly in there, which is not great for the hands. But we did soundcheck, and I thought, 'This is going to be alright!' The thing to do, obviously, is to just focus on what you're going to do, and you can't think about other things."

"I was happy, relieved, whatever - there were a couple of little moments....I'm a perfectionist, so there's a couple of moments where there were slightly sharp bends, and that was just way too much adrenalin! I was just happy to be involved - for such a great cause, too! To be on the same stage with all those amazing musicians, and bands, and such. Yeah, it was a perfect way to end the year, really!"