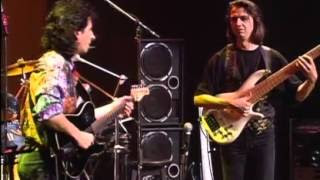 Recorded at Salle Wilfrid Pelletier of Place des Arts-July 6,1991
During the 12th edition of the Festival International de Jazz de Montreal
UZEB ~ Après Les Confidences
UZEB was a Canadian jazz fusion band from Montreal, Quebec, who were active from 1976 to 1992.UZEB was formed in 1976 in Drummondville, Quebec, by guitarist Michel Cusson. After the band's debut in St-Eusèbe, Qc, the name Eusèbe-Jazz was used; this name was later shortened to UZEB. The band soon moved to Montreal. The members were Alain Caron (bass guitar), Michel Cusson (guitar), and Paul Brochu (drums). UZEB had a blend of skilled playing and modern synthesized timbres, along with an emphasis on original compositions. The band won a number of Canadian awards during the 1980s.