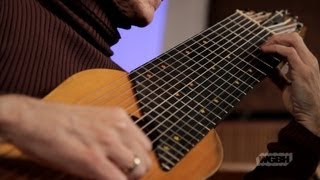 When Peter Blanchette was just twenty years old he had the crazy idea of an expanded range instrument beyond a standard guitar "that sounded more like a lute, but was still a guitar." Thus was born the 11-string archguitar, custom built in 1981 by Walter Stanul. Blanchette's friend Elliot Gibbons had similar ideas and commissioned a second instrument from the same builder, but with a slightly different design.

Blanchette and Gibbons perform here inside the First Lutheran Church of Boston -- part of the "Bach Around the Clock" sun up to sun down birthday celebration event of J.S. Bach produced by Classical New England, WGBH.