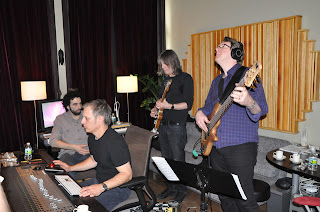 The Dave Weckl/Jay Oliver Megaproject is moving along nicely!

If you’re one of more than 1,600 people who have pre-ordered this project through Pledge Music, you’re going to get a NEW SONG in the next few weeks!

Haven’t pledged yet? Get on board! You’ll get the new song when it’s released, the whole album before it hits the street, and access to several behind-the-scenes videos!

Use the navigation on the right side of this page to make your pledge!

Most of the songs have been written and are now being charted for the tracking sessions. Everything is sounding great. This will be an eclectic album – much like Dave’s earlier recordings – with Latin, funk, Irish, and jazz tunes!

Recently, Dave was in NYC performing with the Oz Noy Trio. While there, he recorded sessions with Mike Stern and Tom Kennedy for the new project. The sessions went great. Those who have pledged will get to see some of this footage soon!

Starting April 9th, Dave and Jay will record more tracks with Tom Kennedy, plus a bunch of tracks with Gary Meek (sax)! Of course, there’s plenty left to do, but things are progressing nicely.

APRIL 10
Dave and Jay will run their “Fantasy Day” in Los Angeles. You can still pledge to be part of this! Just roll over the “Fantasy Day” link in the right column of this page. During the day, you can spend time with Dave, Jay, and Tom Kennedy in Simon Phillips’ studio while they record a tune! In the evening, you get to have dinner with Dave, Jay, Tom Kennedy, and Gary Meek, and then watch them perform live at Cafe Cordiale in Sherman Oaks! Just a few spots left, so pledge today!

APRIL 13/14
Dave and Jay will perform with Tom Kennedy and Gary Meek as part of Central Illinois Drum Fest 2013. Dave will also do a clinic on the 14th.

There have been some questions about the release date for this project. As you may know, full album releases take quite a bit of time to complete. This includes writing, recording, mixing, mastering, and packaging.

For the Megaproject, we’re working with lots of guest artists and we’re also producing a behind-the-scenes DVD. This isn’t your ordinary recording project. Lots to do – but it will be well worth it!

So, we appreciate everyone’s patience as this all comes together. We expect the full project release sometime this fall.

Thanks everyone! More soon!

- The MEGAPROJECT Team
Dave works from behind the drumkit
Dave and Jay check the cameras!
Behind the board
"That button makes it LOUDER...!"
With project coordinator Steven Orkin and his lucky shirt (from Vic's Drum Shop!)
Recording tracks in New York
Tracking session in NYC
The dudes...