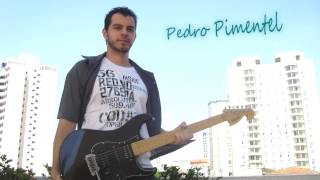 Guitarist and producer Pedro Pimentel has just released his first solo album (self-titled). The 10 original tracks were all performed, arranged, produced, mixed and mastered by the musician itself, and are all available for free streaming at his YouTube channel: http://www.youtube.com/pimentelpedro , were you'll also find videos of live performances, interviews, videoclip and related websites.
In parallel, Pedro Pimentel continues its work as a freelancer musician (guitarist, producer and instructor) and as a member of rock band Morfinna.

"Guitarist Pedro Pimentel has an interesting solo work, in which his technique and playing skills are highlighted, but without the common exaggeration that is usual in projects of this nature. 'Strider' is a composition with a very modern theme and great guitar solos. Good quality recording and very tasteful tones."
[Guitar Player Magazine (Brazilian edition) - March 2013]

Student of well-known Brazilian musicians, Pedro Pimentel is a graduate in Fusion Guitar at Escola de Música e Tecnologia (EM&T), being elected the most promising student at the first edition of Nossos Talentos Top (“Our Top Talents”) festival.
Also graduated at Instituto de Áudio e Tecnologia (IAV), he produced and performed live and in CDs, singles and DVDs for various artists and bands, besides working as a jingle and soundtrack producer for several companies and as editor, producer and audio technician at TV Cia. Da Música (internet music channel with more than 300.000 views).
His work – as a solo musician or a member of rock band Morfinna – is being highlighted in TV shows, magazines, newspaper, radios and websites.
As well as promoting his first solo album (self-titled), in present times Pedro Pimentel works as a free-lancer musician, producer and music instructor.

Guthrie Govan: Framed In the room with Zimmer