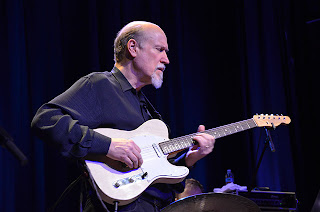 Combining a jazz concept with an electronic-influenced vocabulary, John Scofield takes us behind the scenes of his new album, "Überjam Deux," and dishes on everything from relic’d guitars to Dead tunes.

You could make a case that John Scofield gets bored easily. “Maybe a little bit,” he says with a laugh. Even a cursory glance at his output from the last decade reveals he has tackled everything from straight-ahead modern jazz (ScoLoHoFo’s OH! and Enroute) to an old-school R&B Ray Charles tribute, and even New Orleans gospel (Piety Street). Yet within each new musical outfit, Scofield’s edgy, Vox-powered tone comes through loud and clear.

On his latest album, Überjam Deux, Scofield reunites with the same outfit that was on his 2002 album, Überjam. It shares the same forward-thinking approach his previous employers, Miles Davis and Billy Cobham, explored in the heyday of jazz-fusion.