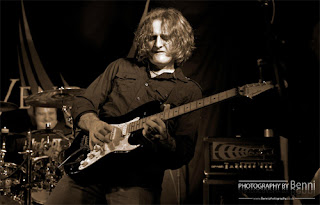 This exciting 21 track digital only release sees Box’s previous solo albums - 2002’s “Plectrumhead” and 2005’s “Moonfudge” - packaged together and get a 2013 makeover thanks to Edward going back to the masters and making improvements where he felt necessary. These improvements range from better overall sound to new rhythm guitar tracks on a number of songs and even new lead breaks on others.

Renowned as one of the tastiest traditional metal guitarists to have come out of the UK in recent years, and known for his work with traditional metal outfit VENDETTA, Edward Box has honed an exemplary style of play built around the influence of Michael Schenker, George Lynch, Eddie Van Halen, Joe Satriani etc. Whilst many are happy to deliver smoking solos and not much else, Edward has made sure he has a stellar musical backdrop over which he delivers his guitar thrills.

“Motion Control” sees Box delivers a multitude of rock styles, and sees aggressive passages blend with melodic lead breaks all topped off with a very soulful vibrato make him stand out from the pack.